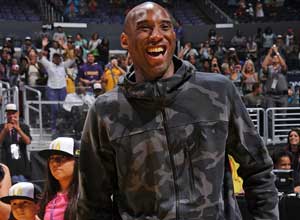 Kobe Bryant wasn’t at the USA Basketball mini-camp this week, but that doesn’t mean he isn’t interested in competing with USA across his chest one more time. USA Basketball chairman Jerry Colangelo said he’s talked to the Laker about giving international competition another go. More from ESPN:

“I was quoted on Kobe,” Colangelo said after USA Basketball’s intrasquad scrimmage at the Thomas & Mack Center. “In response to a question about him, I said it would be a great story if he did [play in Rio].

“And so, he also mentioned to me in a private conversation that if he had his druthers, he would love to ride off into the sunset playing one more time and winning the gold medal. And that would be the end. But he was very quick to say, ‘But, I don’t want a spot. I need to earn the spot. I need to be capable of playing at that level to be considered.’ And I said, ‘You got that. That’s always there for you, Kobe.'”