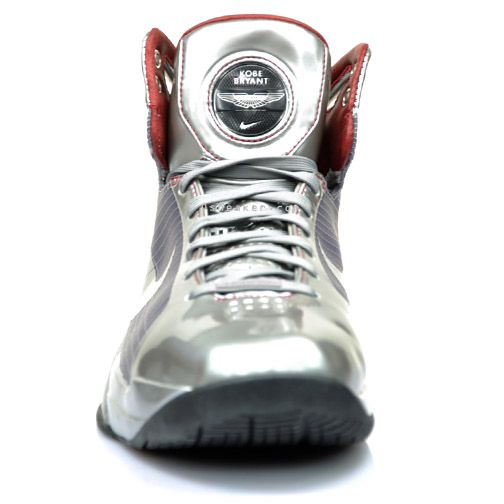 Nike’s Hyperdunk can be credited with a lot of things. The shoe introduced the basketball-playing world to flywire technology and an infinitely lighter shoe when it first dropped in 2008. It quickly became a go to sneak for players at all levels, releasing in a million and four colorways (by my count) in the almost two years since it debuted.

I’d like to personally thank the Hyperdunk for plunging me into scary new depths as a sneakerhead. This week, online retailer osneaker blew things up when they started pre-selling the Kobe Bryant/Aston Martin edition of the Hyperdunk on their site.

The silver, red and blue sneaker is generating an enormous amount of buzz online, extending past the typical sneaker-related sites that normally eat this stuff up. With only 500 pairs made and all of the bells and whistles of the Hyperdunk, along with fancy-pants leather and an Aston Martin logo on the tongue, people are drooling over their keyboards trying to get these things.

The $550 price tag that attached itself to the shoe early in the week has now swollen up to $700.

Situations like this used to be the tipping point for me. I used to feel guilty for wanting the same shoe in multiple colorways. That passed years ago. For a minute, I felt bad about the stacks of boxes that were piling up in my home. For a minute. Outrageous prices on sneakers have always been where I’ve drawn the line. Five years ago, I would have looked at this post, looked at the price and scoffed. Easy pass. I love my sneakers, but I can’t — I won’t — pay $700 for them.

Kobe’s Aston Martin HD’s changed all of that. I take one look at the shoes and my mind goes through a rapid-fire mental checklist.

I didn’t even flinch when I saw the price. Mind you, I don’t have 700 bucks to drop on these shoes, but the fact that this mental barrier has been knocked down is monumental. I write this with my apartment filling up with sneakers at a rate that has thrown my parents into the most bitter fight of their 34-year marriage. My Dad wants to call the producers of Intervention on me. My Mom is convinced I should be on the next episode of Hoarders. They have no idea that I’ve somehow found a way to drop what I could spend on a small vacation, a nice TV, or you know, rent, on sneaks that I’d be petrified of dirtying up. Really, what would you even be able to do with the Aston Martin HD’s if you had them?

I’d set mine up in a glass cube and sleep next to them at night. But that’s just me.