Kyle Korver Out With a Broken Nose 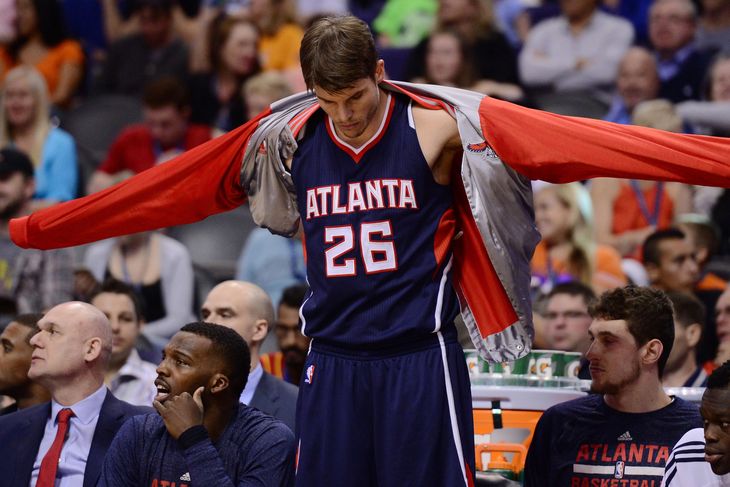 Hawks sharpshooter Kyle Korver suffered a broken nose Sunday night against the Lakers, and will not travel with his team Monday as they face the Sacramento Kings.

Kyle Korver will stay in LA to have nose examined. #ATLHawks

Korver suffered the injury during the second quarter and did not return to the court.

Atlanta rested most of their starters, but still held off Los Angeles 91-86.

Per the AJC and LA Times:

Korver caught a shoulder from the Lakers’ Ed Davis, who was charged with an offensive foul. Korver’s nose immediately began to bleed and he was taken to the locker room for examination. […] Korver played just 10 minutes without a point before leaving. Korver’s 51-game streak with a 3-pointer will end. It was the second-longest streak of his career, second to his NBA-record 127-game streak.

Korver was scheduled to get a day off Monday against the Kings. The Hawks were already resting starters Jeff Teague, DeMarre Carroll and Paul Millsap and without injured Thabo Sefolosha and Mike Scott.

Coach Byron Scott found fault with a lack of physicality, saying the Lakers did a “terrible job” of setting screens, the latter a season-long problem in his opinion. […] “Maybe they’re scared of contact, I don’t know. [I’m] serious,” Scott said. “I’ve asked them. Some of it is the guard’s responsibility to make sure they set the guy up but when he does, the big [man] has to take the responsibility of setting screens.”