Kyle Lowry Doubts He Can Coexist with Kevin McHale 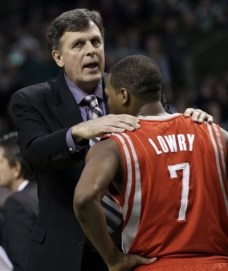 It had been rumored that PG Kyle Lowry is unhappy with Rockets coach Kevin McHale, and Lowry admitted on Friday that he may need to be traded if a change isn’t made on the sidelines next season.

Choosing his words carefully, Lowry told the Houston Chronicle that he couldn’t co-exist with McHale next season:

Lowry does not believe he and Goran Dragic, his successor as the starting point guard this season, will both return to the roster next season. Lowry was even less confident he and Rockets coach Kevin McHale can successfully coexist.

“If things aren’t addressed coaching-wise, I guess I have to be moved.”

But McHale did not believe the issues were too great for him and Lowry to work well together.

“That’s very surprising,” McHale said. “I didn’t think we had too much of a problem coexisting this year. Everybody has a little beef every once in a while. I didn’t feel like (there were problems). He apparently did.

The Rockets are likely to keep McHale and bring back Goran Dragic, who excelled as a starter as Lowry dealt with injuries. Lowry is on a very manageable contract through the ’13-14 season, and the Rockets could trade Lowry. But the Rockets believe Dragic and Lowry can get starter’s minutes on the same team and play well together.

Lowry may have no choice but to coexist with McHale as coach. He played at a near All-Star level before injury last season, and if he’s healthy, he could excel once again.