Kyrie Irving After Loss to Bulls: ‘I Was Just Real Sh*tty With the Basketball’ 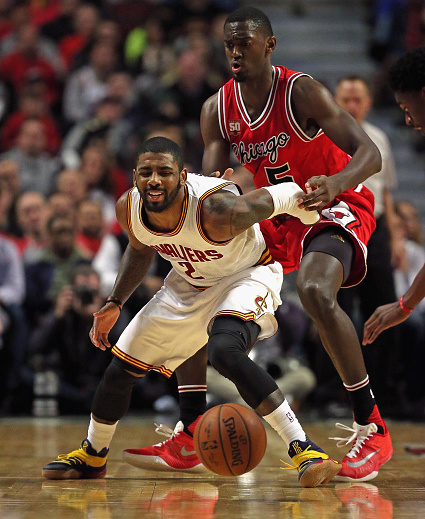 The Cavs lost to the Bulls on Saturday night thanks to a sloppy fourth quarter.

At times, Cavs PG Kyrie Irving (11 points, 8 assists, 4 rebounds, 4 TOs) was over-dribbling, and he turned it over three times in the fourth.

Kyrie Irving needs an intervention. Addicted to manic over dribbling. Help if you can. https://t.co/uY5jzcGnCw

Afterwards, Kyrie took all the blame for the loss.

Following a 105-102 loss to the Chicago Bulls in which Kyrie Irving coughed up three fourth-quarter turnovers Saturday, the Cleveland Cavaliers’ point guard took the blame for the result.

“I was just real s—-y with the basketball, that’s all,” Irving said. “Handle wasn’t crisp, and Justin Holiday threw great defensive pressure at the top of the key, and their defense was extending me out almost to half court. For me, just coming to the bench, I just got to do a better job of leading that second unit — especially when Bron [James] and Kevin [Love] are on the bench.

The Cavs were up by three to start the fourth quarter, with Irving taking the floor alongside Cleveland reserves Matthew Dellavedova, Channing Frye, Richard Jefferson and Timofey Mozgov (who came off the bench with Tristan Thompson getting the start against Chicago).

Within the first four minutes of the fourth, the Bulls were up by seven, with Irving contributing two turnovers and two missed shots on the first six possessions of the quarter.

“They tried to blitz and corral or whatever, and he’s got to do a better job of handling that,” Cavaliers coach Tyronn Lue said when asked about Chicago’s defensive adjustments on Irving.