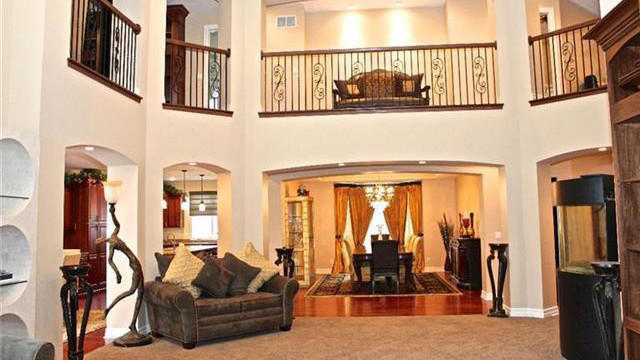 Kyrie Irving will be moving into Daniel “Boobie” Gibson and Keyshia Cole’s former Ohio home. According to the L.A. Times, the Cavs star guard bought the suburban Cleveland home for $800,000 late last month:

While news of LeBron James’ $17 million listing has been leading real estate headlines, new teammate and fellow all-star Kyrie Irving has made a move of his own, buying a Westlake, Ohio, home from former Cavaliers guard Daniel Gibson and his estranged wife, singer-songwriter Keyshia Cole.

The two-story home features a recording studio, a home theater and a trophy room in slightly more than 5,500 square feet.

The 22-year-old point guard paid $800,000 for the two-story residence, found on more than half an acre west of Quicken Loans Arena. Gibson paid $1.25 million for the property in August 2009 and had asked as much as $1.1 million for the home last year.

The Tudor-style home, built in 2007, sports Brazilian cherry hardwood floors, coffered ceilings and stone accents. Features include a music studio and lofted area with a hidden room and a finished basement complete with a home theater, fitness room, trophy room and wet bar.

The first-floor master suite touts a walk-in closet and a bathroom with a soaking tub and salon-style chair. In all, the home counts four bedrooms and six bathrooms in slightly more than 5,500 square feet.