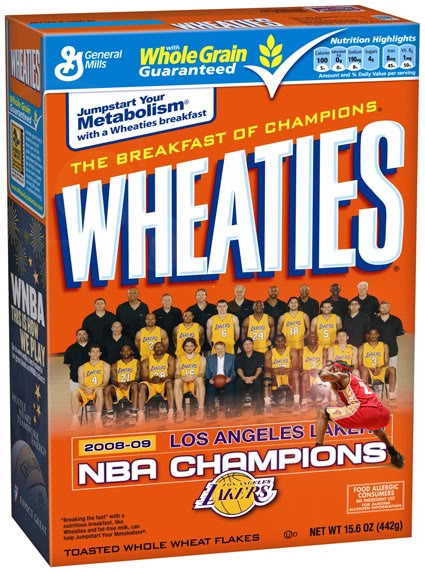 Lakers fans may do a double take when they walk down their grocery store cereal aisle and spot — for the second consecutive year — a commemorative Wheaties box featuring their beloved NBA team: “One of the most storied franchises in all of professional sports, the Los Angeles Lakers added to their legacy by securing their 16th NBA title in Game 7 against the Boston Celtics, and their third Wheaties box appearance. Led by perennial All-Star Kobe Bryant, a standout squad that included Pau Gasol, Lamar Odom, Andrew Bynum, and Derek Fisher brought back-to-back NBA titles to Los Angeles. Wheaties salutes the Los Angeles Lakers with a 15.6-oz box, available nationally beginning late July 2010.”