Lakers May Retire Both of Kobe Bryant’s Jersey Numbers 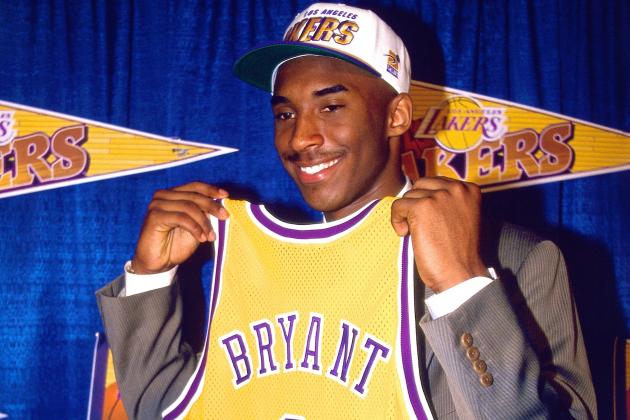 Soon after Kobe Bryant officially walks away from the game, the Los Angeles Lakers will hold a lavish jersey retirement ceremony to honor the living legend.

Kobe’s remarkable twenty-year career may warrant a pair of jerseys being hung up in the Staples Center rafters—the No. 8 from his ‘Frobe days, and the No. 24 that defined The Black Mamba era.

According to GM Mitch Kupchak, Bryant is the greatest Laker of them all.

Which of Bryant’s two numbers will the Lakers honor? […] “I don’t know the answer. Obviously it’s going to be 8, 24 or it could be both,” said Lakers General Manager Mitch Kupchak at a season ticket holder event Sunday.

Bryant played the first half of his career with No. 8, winning three championships. He wore 24 for the Lakers’ most recent two titles.

Where does Kupchak place Bryant among the greatest Lakers of all time, a list that includes Magic Johnson, Kareem Abdul-Jabbar, Shaquille O’Neal, Jerry West and Wilt Chamberlain? […] “The fact that [Bryant] put together 20 years, to me, separates [him] from the pack,” said Kupchak. “We’re so lucky and gifted to be able to watch this guy. To make his announcement, now you can watch every game on TV; come to every game in the arena — and really appreciate what you’re looking at,” said Kupchak. “It’s really a gift that he’s giving us. It’s going to be a really sad moment when we look at our roster sheet, and you go down the sheet and Kobe Bryant’s name is not going to be on it.”

Related
Lakers GM: ‘We Cannot Move on as a Team Until Kobe Leaves’