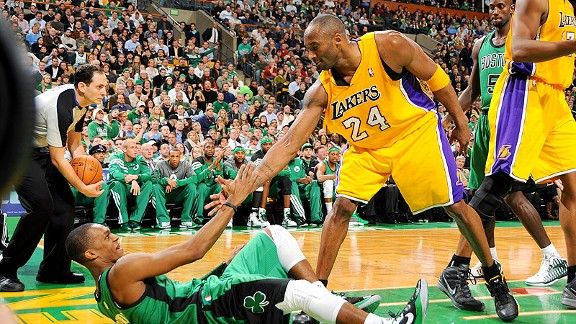 Boston Celtics star point guard Rajon Rondo is in the final year of his current deal, and will be one of the most sought-after free agents next summer.

Rondo is looking for max dollars on the open market, but it’s unclear if the C’s will be willing to open up their checkbook that wide.

Reportedly, the Los Angeles Lakers are expected to go hard after Rondo, as they slowly rebuild and try to salvage the final years of Kobe Bryant’s career.

They need Bryant for television ratings, too. The Lakers had the fourth-highest local TV ratings in 2012-13, Bryant’s last full season, and a $4 billion deal with Time Warner to live up to. He’s the reason TNT and ESPN will still pick up a Lakers-Warriors game that might be over at halftime instead of Mavericks-Pelicans game that might actually be relevant. Stars drive ratings, and Kobe is still among the biggest in the sport.

But those reasons have nothing to do with basketball. The Lakers are looking down the barrel of a difficult rebuild. They could have $30-plus million in cap space next summer, and there are players they can wave it at. They could make a creative, Chandler Parsons-style offer to a restricted free agent (LA-born Kawhi Leonard, OKC’s Reggie Jackson), they could throw a max offer at Detroit’s Greg Monroe or Memphis’ Marc Gasol and they could also hope that the handful of players with options for ’15-16 (Al Jefferson, Brook Lopez) opt out and look in their direction.

There is one player who makes sense in LA next season: Rajon Rondo. Several rival executives believe the Lakers will make a strong run at Rondo next summer, and it’s easy to see why. Rondo is young (28), plays a critical position and shares the same win-at-all-bleeping-cost attitude as Bryant. The Celtics are rebuilding and have a young playmaker in Marcus Smart, which may limit their desire to hand Rondo max money.