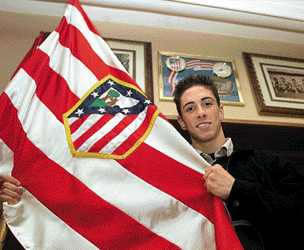 Caught the Atleti-Zaragoza match, expecting a lot of goals and excitement. Didn’t happen. Typical Rojiblanca; they lost on a shit goal after defying convention and playing a rather mundane game against arguably the most exciting side in La Liga. But that’s just how things go if you support the red&white.

Luciano Galleti was inspiring and Fernando Torres ran around like his typical jack-rabbit self looking for balls that weren’t there. Note to Javier Aguirre: Maybe you should throw the Kun Aguero out there for the full 90. If you don’t play another forward for Torres to work with, he gets lost between the inexperience on the flanks and the center midfield’s inability to get him the ball in the right spots. So he runs and he runs and he runs, doing his “I’m too sexy for my Euro style” prance. It’s cute, but it probably isn’t the best way to find goals.

The defense was typically solid, but dealt with another unlucky blow at home. It reminded me of one of my saddest experiences in Spain.

On the bright side, I met the only other Atleti fan in the Big Apple. Ya’ll ain’t ready.

Barcelona 3 – Recreativo Huelva 0: Ronaldinho wakes up. He seems to be alternating between form and slumber.

Racing Santander 1 – Valencia 0: UPSET! “In football, only the goals count.” True story. Also check how absurdly grey it was during the match. Assist to the fog.

Villareal 1 – Real Sociedad 0: Sadly, there are no videos for this. Though a Villareal goal against the royal society might look something like this offering from Juan “Times New” Roman Riquelme. And since we have no video footage, let’s just check in with my main man Sid Lowe. He notes: There’s no Patxaran or pinchos here, no tasty tucker nailed on to a piece of bread with a strategically-placed and potentially lethal cocktail stick, because El Bar Antiguo is closed until further notice. And, let’s face it, is likely to be closed for some time. The reason is simple: the sign on the door reads: “This establishment will remain shut until la Real [Sociedad] win two consecutive games,” and that’s a pretty big ask. In fact, forget two successive games, winning one is a pretty bloody big ask right now. Because right now Real Sociedad are rubbish.

Real Madrid 3 – Nastic 1: After a sluggish start, Real respond with three. Another angle of Robinho’s gol-A-zo.

On Antonio Cassano: It was revealed that the Italian attacker was so hacked off at his continued absence from the Real Madrid starting line up that he stood face to face – well, face to chest – with Fabio Capello after the game and blew a gasket.

“I deserve to be in the team,” he squealed at his somewhat surprised manager, “have you know shame! It’s a disgrace. I saved your arse at Roma and this is how you repay me!”.

Unsurprisingly, this very public outburst has not gone down at all well at the club. Pedja Mijatovic – who is quite a scary looking man – spoke to the club’s three captains Raul, Guti and Roberto Carlos to discuss a suitable punishment for the minute miscreant. However, some would suggest that asking Guti and Roberto Carlos for advise on disciplinary matters is like asking a Spaniard how to queue. (only kidding, Spanish readers).

The club announced yesterday that Cassano will be suspended from the team and also hit with a hefty deduction from his donut fund.

On Ronaldo: On this occasion, it’s entirely his own fault. Ronaldo got off to an incredibly bad start with Capello, over the summer, when he travelled to Brazil to have an operation on his knee without the club’s permission. When he returned to “a very special” welcome in August, according to his new manager, the titan of tapas was still seen as too hefty. Despite photos appearing in the papers of a Rocky style road running Ronaldo, the Brazilian, at 91 kilos is still 4 kilos overweight according to the club’s training staff and is miles, literally, from being match fit.

When Ronaldo did set foot on the pitch – in the shocker against Getafe – he was appalling and got himself sent off for back chatting the referee, thus missing the subsequent Barcelona game. With the emergence of Robinho and Raul as attacking forces, it would not be a great surprise to see both players booted out of the club in the winter. For one of them, it is about two years too late.

“Titan of tapas.” Incredible. And while we’re on the subject of Ronnie, check out the interview that All-in-White translated from a recent newspaper interview he did. Dude wants to win the nobel prize!

Getafe 2 – Depor 0 (another shutout for the duck!)

Barcelona 2 Chelsea 2: Quite a match. The Lampard goal is one for the ages, and Chelsea’s late resolve in finding the equalizer hurts my feelings, but it’ll be the kind of match they can build on in the latter stages of the Champions League. Watching Mourinho celebrate, one can only assume that he is, in fact, satan. That fist pump is like Tiger Woods on evil juice.

Real Madrid 1 – Steaua Bucharest 0: We call this, “Real tries to blow this game in every possible way until a 21 year-old Romanian international ruins his future by passing back to a keeper that wasn’t there.”

Shakhtra Donetsk 2 – Valencia 2: Some excellent long range shooting in this one.