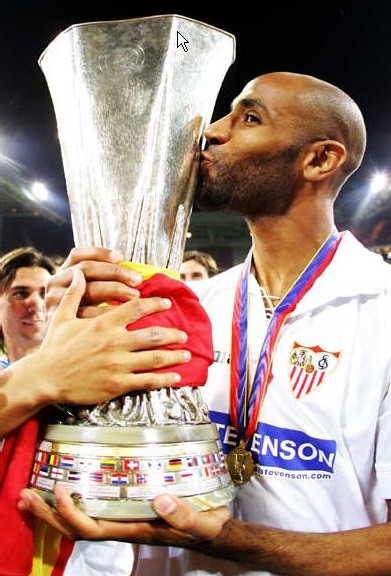 It’s about time we started talking about Sevilla, the potential title contender that still hasn’t figured out its TV deal. That would explain the strange angles in this video. No matter, they’re still bum-rushing the competition, led by current pichichi, Kanoute (the dude to your left), and Luis Fabiano.

While Sevilla continues to play well, it was another strange day for Valencia, a side that has become surprisingly dysfunctional of late. Sid Lowe explains:

If Barca doesn’t win in their final match against Werder Bremen, they will be eliminated from the Champions League. Tuesday December 5 is the day of reckoning. They’ll have to do so without Eto’o, Messi and Saviola.

Ruud chokes away victory with a late PK miss. At least it wasn’t as bad as their trip to Lyon.

La Liga Loca: Real Madrid will be without Guti – worryingly described as the brain of the team, in one paper today – for three weeks after picking up an injury in the 2-2 draw with Lyon. Then again, he was set to be suspended for two games, anyway.

With the injuries mounting and their place in the Spanish table plummeting, Los Che might have to focus most of their attention on the CL knockout phases.