LeBron: ‘[Bulls-Heat is] Going to be [an] Offensive Struggle’ 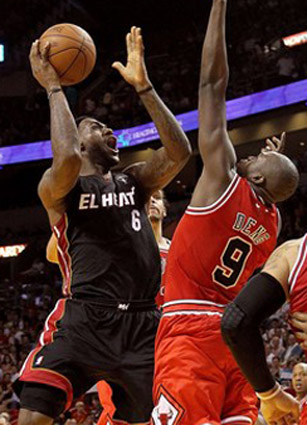 The Bulls-Heat series begins tonight, which means just about the entire world is looking ahead to what could be one of—or the—best series of the NBA Playoffs.

While nobody is entirely sure what’ll take place, LeBron James has one prediction: That it’s going to be a defensive, grind-it-out battle. That’s not a great thing for the general public, which tends to love a high-scoring, high-flying affair, but this should be positive news for basketball purists who love a good dogfight.

The Heat Index has more:

LeBron James had a bit of advice Saturday for fans who are expected an exciting, high-scoring, offensively efficient playoff series between his Miami Heat and the Chicago Bulls: watch the Western Conference finals instead.

“I can definitely see points in the game when it’s not going to be fun for fans to watch if you love exciting basketball because it’s going to be offensive struggles sometimes,” James said Saturday as the Heat wrapped up preparations in Miami and traveled to Chicago for Game 1 of the Eastern Conference finals on Sunday. “It’s going to be two great defensive teams [that] take pride defensively, [teams that] get more out of getting stops than they do in scoring.”

With two of the league’s top-rated defensive teams set to matchup for the right to advance to the NBA Finals, James knows that points will be at a premium. But he’s not expecting a relative shutout, either.

“Hey, they’re a good team. They didn’t get here by accident,” Thibodeau said Saturday. “When you look at the teams that have gone this far you have to be well-balanced. You have to be good on offense, good on defense, good rebounding, and you’ve got to take care of the ball.”

These two Eastern Conference powerhouses tip off tonight at 8 p.m. EST in Chicago. If you’re not excited for this one—well, we don’t really know what to tell you. You gotta be.