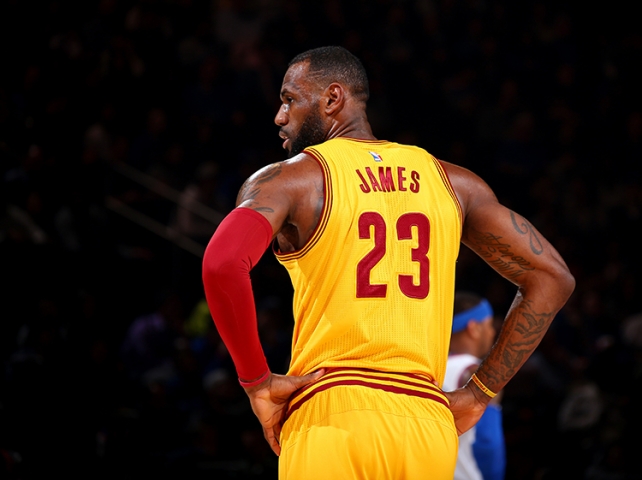 Forget all of the silly drama of the past few weeks for a moment, and consider the following: LeBron James has shifted into Playoff mode, and says he’s confident in the Cleveland Cavaliers challenging for the 2016 NBA title.

James reported Saturday night after hanging a triple-double on the Knicks in a win at MSG that his body feels great, and that he’s gaining strength as the regular season winds down.

LBJ has put up avereages of 29 points, 8.5 rebounds, and 8.5 assists over his last four games.

He hasn’t been the defensive presence he has been in years past, but the Cavs believe he has been pacing himself through the 82-game season. […] “At this point, I understand the moment that I’m in,” James said. “I understand how important I am to this team and what we’re trying to do, so I’m just stepping up my play a little bit.”

James has reiterated for weeks that physically he feels terrific, better than he has at this stage of a season in years. He demonstrated that again Saturday with a dunk through a double team of Lou Amundson and Kristaps Porzingis that brought fans in Madison Square Garden — and the players on the Cavs’ bench — to their feet. […] “I haven’t jumped out of my seat like that in a long time,” Kevin Love said of James’ dunk. “I ran with J.R. [Smith] almost to the basket. That was impressive. That’s a strong man there.”

Bad losses, chemistry issues and James’ social media habits have dominated the conversation for the past couple of weeks. James used the opportunity of being in New York to declare the Cavs title contenders. […] “I feel like we’re ready to make a championship run,” James said. “I’m confident in this team and I know we can make a championship run and that’s all you can ask for. It is what it is with our team sometimes, the way we come out,” James said. “But I believe in what we have and I know we can win a championship with the group we have. I’m confident in my abilities to lead this group and everything else is just smoke and mirrors and don’t even matter to me.”