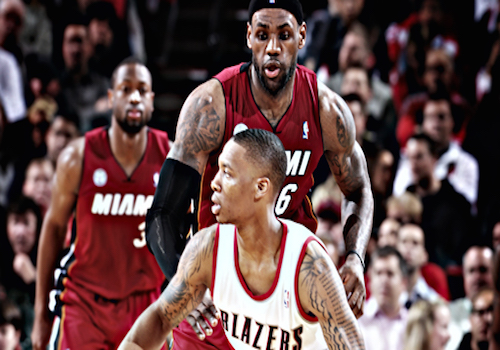 Those pesky Internet sleuths dug up a series of tweets that Damian Lillard fired off while still in college -– the Portland Trail Blazers All-Star had (like most people) plenty of unflattering things to say about LeBron James and his infamous choke job during the 2011 NBA Finals.

Lillard called his actions online “irresponsible” last week once they came to light, and LeBron diplomatically brushed off the mini-controversy.

The Cleveland Cavaliers are in Portland to take on the Blazers Tuesday night.

“I didn’t even see the tweets,” James said Tuesday morning prior to the Cavs game against the Blazers. “I don’t really get into social media like that. He came to me before it even got to me and we hashed it out right there. So it’s no big deal.”

“One of my coaches used to always tell me that when you make mistakes, you’ve got to face the music,” Lillard. “In college, me and some of my college teammates were messing around. I was the obvious Miami Heat fan and they wanted Dallas to win and I made some comments about LeBron that was uncalled for. And that just goes to show that a lot of kids now on the social network, a lot of the stuff that you put out there, you never know when it can come back. So my advice to them is to be careful with that.

“It was just irresponsible. It’s something that I’m not proud of. But I can also say that I’ve grown up since then. And I was just a young kid doing crazy stuff with my teammates.”