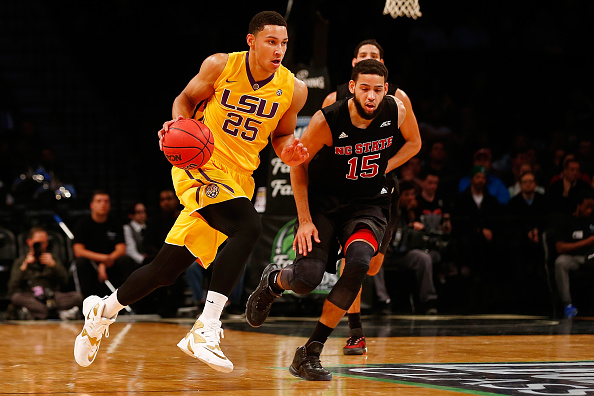 LSU’s Ben Simmons has been gaining a lot of momentum as a potential No. 1 pick in next year’s NBA Draft. Some have even compared his game to LeBron James‘. And while that’s a comparison that might seem outlandish off the bat, LeBron himself says he doesn’t mind the comparisons. In fact, LeBron and Simmons speak regularly on the phone, according to ESPN.com’s Dave McMenamin. The pair hung out over the summer at Nike Basketball Academy in California, and Simmons has even called Bron a “big brother.” Here’s more from LeBron, on Simmons:

And even though James recently called for basketball greats to stop being judged against one another, he says he’s OK with the comparison being made between him and Simmons.

“I don’t mind it,” James said Friday before the Cavs’ 114-108 overtime loss to the New Orleans Pelicans. “Someone’s going to be compared to someone all the time, and I don’t mind him being compared to me. People not only recognizing what he does on the floor, but he’s a great kid, too. He has a great family, great support system, and that’s why he’s able to do what he [does] on the floor.”

Simmons attended Friday night’s matchup, taking a seat in the section behind Cleveland’s bench in the third quarter.

“He’s one of the best players in the world that’s played the game,” Simmons said in an interview with ESPN. “I just try to take little parts of his game and put it into mine. His size is one of the things that I look at. I’m 6-10, and he’s right at 6-8 or 6-9, and I just try and fit what he does into my game.”

James said his relationship with Simmons, a native of Australia, goes back long before college.

“I’ve watched him a lot, but I’ve watched him way before he showed up at Baton Rouge,” James said. “I’ve been on him for probably three or four years now, and he’s an unbelievable talent.”