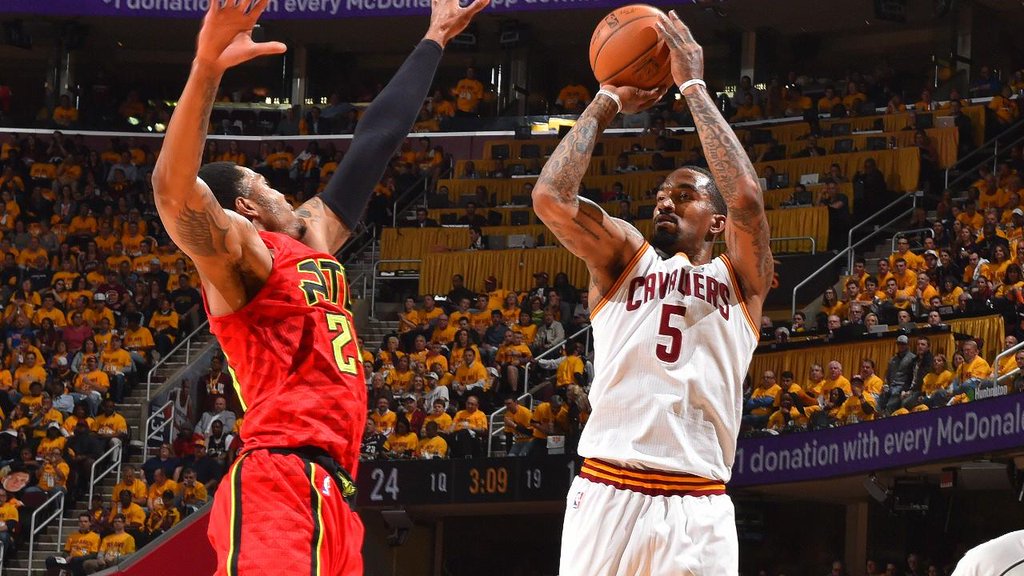 People initially laughed at the Cleveland Cavaliers when they nabbed J.R. Smith, but he’s proven to be a valuable contributor and superstar teammate LeBron James says that Smith can launch three-pointers to his heart’s content.

J.R. Smith: "My teammates tell me to shoot the ball when I'm open. I feel like I'm open most of the time, so I shoot it."

Smith drilled seven of them Wednesday night, as the Cavs routed the Atlanta Hawks in Game 2 and made a record-breaking total of 25 treys.

Smith connected on a franchise playoff record six 3-pointers in the first half.

It was the second time in this postseason that Smith hit seven 3s. The last time was on April 20 in Game 2 of the first-round series against the Detroit Pistons, when the Cavs tied a playoff record with 20 3-pointers. That mark was eclipsed on April 24 when the Golden State Warriors hit 21 against the Houston Rockets. […] “He is known to always make tough shots,” Cavs center Tristan Thompson said. “The 9-1-1 [shots]. The one’s where you’re like ‘No-no.’ But he is great at it. He squares his shoulders up. His leg might be off balance and he might not have proper mechanics, but he knocks them down. It was fun to watch.”

When asked if the record night at Quicken Loans Arena was his nirvana, Smith downplayed it. […] “Something I would love to see for my play style, but I think the credit goes to how much we work,” he said. “We work on our shots every day and we’re very competitive with one another on shooting the ball. I mean, I’m glad it happened but we can’t settle. Gotta keep moving on.”

Asked what it would be like to play like Smith, James considered it “almost a trick question.” […] “What do you mean by that? Where you can just shoot any shot that you want?” James said. “J.R., he’s the only one on the team that has the ultra-green light. It’s like fluorescent. Coach says, ‘Hey, J.R., shoot! Shoot, shoot it, shoot it, shoot it.’ I just think it puts him at ease, when he’s able just to know, ‘Hey, I’m open’ — or sometimes when guys are even not close enough — just to let it go.”