LeBron James: Kevin Love Will Get the Ball ‘If he Demands it’ 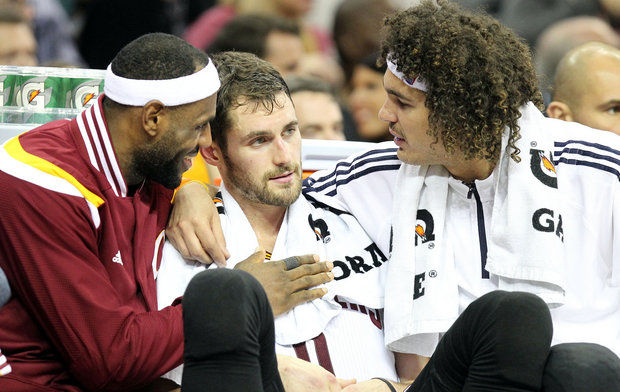 The Cleveland Cavaliers need Kevin Love to be aggressive on the offensive end of the floor, and the world knows how much more involved he’d like to be.

LeBron James hears Love’s complaints loud and clear, but he’s putting the onus on his All-Star teammate to come up with a solution.

James says the Cavs are willing to pass the rock to Love in the post where he prefers it; the big fella just has to make sure to (loudly) remind them.

“It’s the demand,” James said, weighing in on the 6-foot-10 Love’s stated discomfort in the Cavaliers’ offense through 10 games. “Kevin’s a guy, if he wants the ball in the post, he gets it in the post. If he demands it, we’ll give it to him.”

Fifty-six of Love’s 131 shots have been three-pointers this year. He’s on pace to shoot 459 threes, which would not be a career high. He’s also on pace for 1,074 shots, which would be the second most of his seven-year career. […] Compared with James (25.9 ppg) and Kyrie Irving (21.9 ppg), though, Love is having the most trouble assimilating as part of Cleveland’s new Big Three.

“It’s a feel-out process for all of us,” James said. “It’s a little more challenging for (Love) than it is for me and Kyrie because we get to handle the ball a little bit more, and him being a big guy we have to give him the ball when he has his opportunities. He has to make the most out of them.”