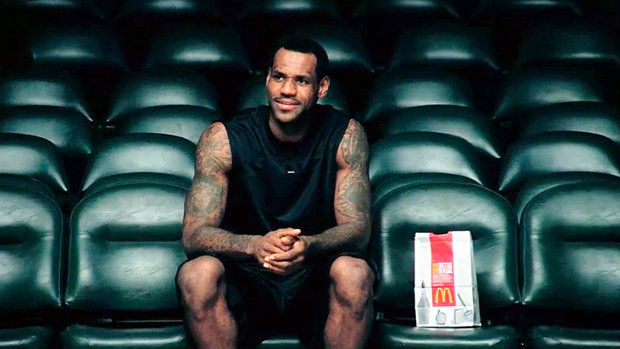 So excited to be to be partnering with @BlazePizza!! Let's Go!! http://t.co/ZeGCfYeWjM

James had been a longtime spokesman for the burger giant, but likely upset them by accidentally calling their products unhealthy.

LeBron started investing in Blaze’s parent company back in 2012.

Together with Larry Levy of Levy Restaurants and his business manager, Maverick Carter, James locked up franchise rights in Miami and Chicago. […] But James, who has previously cashed out of equity stakes in Cannondale and Beats By Dre, added to his ownership of the pizza company by recently committing to be part of its marketing campaign.

“This move aligns with LeBron’s brand and his history of helping companies grow faster and bigger as an equity partner,” Carter said. […] Neither the company nor Carter would disclose the exact stake James has in Blaze, but a source said that he owns more than 10 percent of the company, which is separate from his stake in Chicago and Miami franchise rights.

“LeBron came on as a founding investor, and he had been silent and in the background,” said Rick Wetzel, who founded Blaze with his wife, Elise. “Now we’re using him to get our message out there and put the spotlight on our brand.”