LeBron James Misses Practice and Will Get More Rest This Season 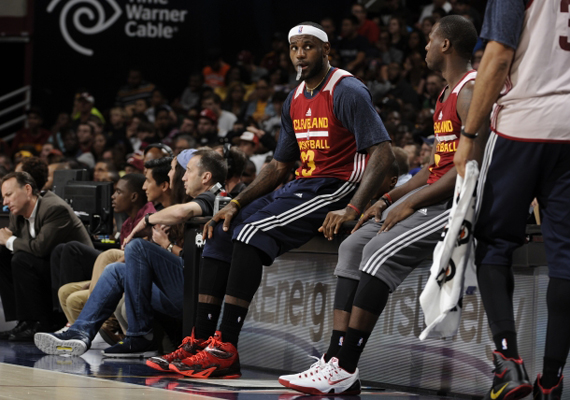 A common (and fair) criticism of Miami Heat head coach Erik Spoelstra last season, was just how hard he rode LeBron James while Dwyane Wade took plenty of time off.

James sat out practice Friday due to his “iffy” back — along with teammate Mike Miller — but he’s expected to suit up for the evening session. Blatt has designs on making this kind of player “maintenance” part of the norm in Cleveland.

“Listen, this is really really insignificant if you ask me in the grand scheme of things if LeBron sits out of practice,” Blatt told reporters after practice. “And I value practice probably more than most. But the fact that we may need to rest him and others at different points during the preparation process, and even during the season in my mind is the right and smart thing to do.”

“Players are here to play, and it’s our job to get them ready and keep them healthy so they can participate in every game,” Blatt said. “It doesn’t always work out that way, and sometimes you have to know how to rest guys without the team being at risk. That’s part of the process.”

“I have yet to meet a basketball player that something doesn’t hurt when he wakes up in the morning. I know I’m barely getting out of bed after 20 years of coaching,” Blatt joked. “[LeBron] like many other guys have some aches and pains, and we’re trying to be sensitive to that.”