LeBron James: ‘Not Impossible’ He Would Play in Cleveland Again 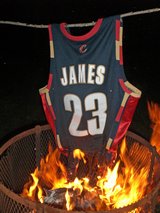 During a business trip to England — there to check in on his investment stake in the Liverpool football franchise, and of course, to push Nike products — LeBron James sat down for a candid chat with The Guardian.

James opened up about the enormous pain caused by the Miami Heat’s collapse in last June’s NBA Finals, his regrets about how “The Decision” went down, and even said that one day playing for the Cleveland Cavaliers again isn’t entirely out of the question:

Can he understand why he was criticised by so many past great players who felt he had sacrificed his own legacy by linking up so calculatedly with Wade and Bosh – rather than trying to drive Cleveland to a championship? “Of course I understand that. But people talk as if I’m done. I’ve got years left to build my individual legacy – if that’s what they want to call it. But, right now, it’s all about my team’s legacy.”

Was James taken aback by the ferocious criticism of his screening of “The Decision”? “Um, yeah. I was surprised by it because I was making a decision for myself. I was doing something that I believed was going to make me happy and freshen me up. But looking back I can understand why a lot of people were upset. That definitely wasn’t my intention: to upset people.”

Did you feel vindicated by the way that Dan Gilbert [Cleveland’s majority owner] responded? “I didn’t need that to vindicate my decision. I think Dan Gilbert was talking out of anger. And I don’t take anything personal. As a professional athlete a lot is going to be said about you – but I just try to move forward and try to achieve my goals.” You’ve been quoted as saying it’s not impossible you could play for Cleveland again?”It’s not impossible [smiling]” But unlikely? “It’s not impossible [laughs]. I still love the city. I have so many great memories of all those fans – so it’s not impossible.”

Years down the line, if by some miracle, LeBron ended up back in a Cavs uniform, I’d love to see the looks on the people’s faces who burned his jersey when he infamously took his talents to South Beach.