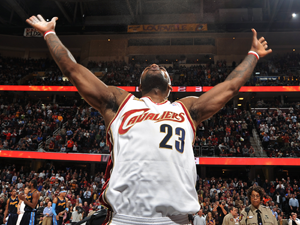 After four seasons with the Miami Heat, LeBron James will take his talents back to the Cleveland Cavaliers.

James had reportedly narrowed down his choices to the Heat and Cavs, and his favorite was truly anyone’s guess until James made the hotly anticipated announcement with a first-person article on Sports Illustrated on Friday afternoon.

In the weeks leading to James’ decision, the Cavs worked desperately to clear the necessary cap space to sign James to a max contract and are rumored be targeting Kevin Love to create a new Big Three in Cleveland. The Cavs are also said to be pursuing LeBron’s former Heat teammates, Ray Allen and James Jones, to join the team next year.

The Heat, meanwhile, asked James, Dwyane Wade and Chris Bosh to opt-out of their contracts and used the financial flexibility to sign Josh McRoberts with their midlevel exception and Danny Granger with their biannual exception.

But a return to the Cavaliers seemed to be imminent as news leaked of LeBron’s reported distaste for Pat Riley’s impassioned press conference after the Finals. LeBron met with Riley in Las Vegas on Wednesday, but the meeting came and went without resolution.

In the end, LeBron chose to return to the franchise that selected him first overall in the 2003 Draft.