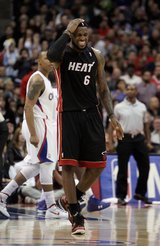 Something decidedly strange was happening at the start of this NBA season: it was a little too quiet in Miami.

The Heat were steam-rolling opponents, LeBron James appeared to be cruising towards another regular season MVP award, and the general public’s hatred of the South Beachers seemed to have become somewhat muted.

A couple of close overtime losses on the West Coast have altered the narrative. And, of course, LeBron James is at the center of it all.

James was bizarrely unassertive in the Heat’s loss to the Golden State Warriors two nights ago, and clanked crucial free throws late last night in Clipper-Land, as Miami lost their third game of the year. LeBron went 9/17 from the line, and missed four big ones late in the game.

The tired debate around James’ ability to come through in the clutch has been revived, and armchair sports psychologists are going to have a field day with this, but according to LBJ, he just needs a little more focus at the line.

Whatever [Erik] Spoelstra said to the players when they joined him in the locker room, there were smiles and laughter as the team collectively shrugged it off. “We gave ourselves a chance to win and we can be satisfied — you don’t like to lose — but we’re not going to hang our heads about this one,” James said, his eyes bright and his tone upbeat at his locker. “I need to concentrate a little bit more out there and knock [the free throws] down.”

The night before, in Oakland, James and his teammates were downtrodden after losing to the Warriors. There was barely a sound to be heard in that locker room. After this game, James was shouting rap lyrics and Wade was sharing private giggles with teammates as he iced his still sore foot. “You never want to lose, but no team ever goes undefeated,” Wade said. “We just move on from the frustration we have. We haven’t missed this many free throws as a team probably ever … you know it will average out.”

James actually played very well. Aside from his near triple-double (23 points, 13 boards, 7 assists), he was aggressive in the fourth quarter and overtime. Just couldn’t knock in his free throws.

As for the Miami Heat’s public approach to the mini losing streak, it’s probably a good idea to try and laugh it off. There will be plenty of time for doom and gloom in the postseason.