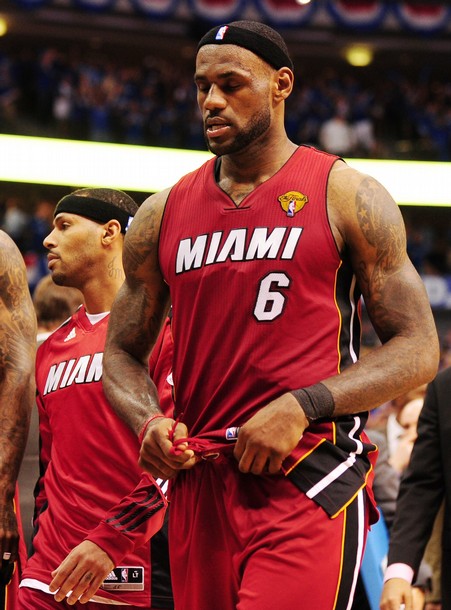 It felt like an inevitability. It wouldn’t take much—just two, maybe three buckets—and then LeBron James would snap out of the abnormal funk that plagued him for Game 4’s first three quarters and put away the Mavs.

Dallas—who managed to scrap up enough buckets to remain competitive, even with strong offensive performances from Dwyane Wade (32 points) and Chris Bosh (24 points)—was making it difficult. Sooner or later, LeBron would toss in a couple daggers, remind everyone that he is indeed the best player in the League, and the Heat would claim a 3-1 series lead and craft a clear path to the Championship trophy.

Despite being guarded by the older, less athletic (trying to be nice here) Jason Kidd, Bron never got it going, not even a little bit, and finished the tilt with a Playoff career-low 8 points off 3-11 shooting from the field. He did sneak a quiet 9 rebounds and 7 assists into his stat line, but his presence on the floor wasn’t felt—not when it was most needed, not even when it wasn’t.

“[I] didn’t play great offensively,” James said postgame. “I’ve got to do a better job of being more assertive offensively, not staying out of rhythm offensively the whole game.”

“He struggled—point blank, period,” Bosh confirmed. “We’ve all done it at times in our careers, and it happens. […] He just has to bounce back and be himself, play his game, and the great player that he is. We know he’ll bounce back. And we need him. So everything else will be fine after that. He just has to go and play.”

It was also the first time James scored in single digits during a post-season game, a feat he hadn’t accomplished during any of his 89 prior Playoff battles.

“He’s physically fine,” coach Erik Spoelstra said. “I don’t have to do a better job of making sure he’s in positions where he can be aggressive and efficient. We’ll do that in Game 5.”