LeBron James on Tristan Thompson: ‘We Need Him Back’ 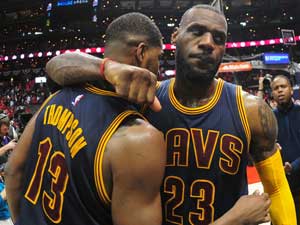 Earlier this week, Tristan Thompson’s agent made it seem like Double T will stick with Cleveland for only this year if he doesn’t get a max deal—then he’ll bounce into free agency next summer.

But it seems that max deal could still be a possibility. Teammate and superstar LeBron James wants Thompson in Cleveland for the long run. More from Cleveland.com:

LeBron James said signing Tristan Thompson to a long-term contract was the “No. 1 objective” for the Cavaliers right now, but stopped well short of blaming the team for the stalemate in negotiations with Thompson.

“He’s a huge part of our team,” James said Thursday at Cedar Point, where he unveiled a partnership with the University of Akron for inner-city children in his LeBron James Family Foundation to go to college for free.

“Short-term and long term he makes our team more dangerous,” James said of Thompson. “Things need to be worked out from his side and the Cavs but we need him back. He’s an important resource.”

James also said the Cavs’ “front office has done a great job. The next step is to get Tristan done.”

His words are significant because of his relationship with Thompson, a restricted free agent who is represented by James’ agent, Rich Paul.

After reportedly nearing an agreement on a five-year, $80 million contract shortly after free agency started on July 1, negotiations have stalled as Thompson seeks a maximum, $94 million deal or something close to it.

On Tuesday, Paul told the Northeast Ohio Media Group that if Thompson and the Cavs are unable to agree on a long-term contract and Thompson is forced to play on a one-year, $6.9 million qualifying offer, it “will be his last year with the Cavs.”

James didn’t sound those same guns, instead commending the Cavs for re-signing Kevin Love to a five-year, $113 million deal, for re-signing James and Iman Shumpert, and bringing in Mo Williams and Richard Jefferson.