LeBron Will Make Decision By His Lonesome 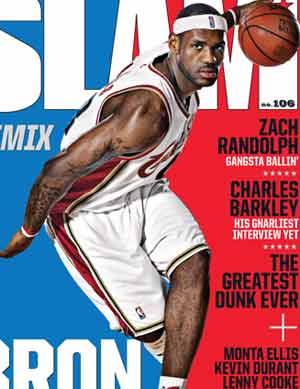 Be it while doing my job or while kicking back with friends and family, I’m always asked where I think LeBron James is going to sign. Often, before I have a chance to answer, the person asking interjects with their own thoughts, usually something based on an internet rumor, and often it includes the words “Jay-Z” or “William Wesley.” On the rare occasion when I do get the chance to answer, I usually say something like, “I don’t know, and I’m pretty sure LeBron still doesn’t, either.” More than that, though, when people, be it reporters or fans, claim to know what James is planning and why, it bugs me—especially when they claim to have inside info from his “people.” Yes, LeBron has a tight circle of LRMR friends, but I’ve always felt like this decision was his alone to make.

Well, today, Brian Windhorst penned a tremendous column, debunking a lot of rumors and, ultimately, solidifying my belief that James is making the biggest decision of his young life by his lonesome.

As seen on Cleveland.com:

Over the last two years, there have been hundreds of different theories as to what LeBron James will do when his free agency finally arrives this week.

But much of it has missed the point. The biggest misunderstanding of the historic James chase is the psychology of the man himself, which is something that can only be understood by knowing him and how he attacks a problem.

This is the central tenet: The decision of where James will play will be made by James and James alone.

James’ personality is to decide on his own and then never look back with regret.

In his interview with Larry King earlier this month, James made it as clear as he could. It wasn’t hyped after the interview was recorded, it wasn’t featured by CNN — but it was the most salient thing James said in the hour-long conversation.

It may be the most important thing James has said in the last year when it comes to his free agency, even if it was easy to miss.

Easy unless you really know James.

“Ultimately, that one person [I listen to] is me,” James said.

It isn’t that James doesn’t listen to friends and so-called advisors. He has put people in place around him for the very purpose of getting trusted advice.

But they’ll all tell you that James doesn’t do anything he doesn’t want to do. Whether it is an interview, a charity event or a business venture, James may not do the little details, but he makes the big call.

Has this process sometimes led to mistakes? Of course it has. But James has no qualms with his belief system. One of his favorite things to say is that he doesn’t have any regrets about his major decisions.

If he stays true to himself, he won’t have any regrets about this huge decision, either.

Because he’s going to be the one to make it.

We’ll see in the coming weeks where LeBron James will land. Until then, if you ask me what’s gonna be with Bron, this will be my response:  I don’t know where James is going to land, but I strongly believe he will be piloting the plane himself.

UPDATE: According to Jonathan Abrams, who quotes an unnamed NBA executive, LeBron James may have already decided to sign with the Chicago Bulls. More from Abrams:  “The executive, who did not want to be identified discussing a player who is not yet a free agent, said he had gathered from discussions with his fellow N.B.A.executives that James was strongly leaning toward joining the Bulls in tandem with another free agent, Chris Bosh of the Toronto Raptors. ‘I think it’s a done deal,’ the executive said. He said he thought James was going ahead with the meetings in Ohio ‘to be respectful to all these teams who jumped through these hoops,’ a reference to the clubs, like the Knicks, who traded reasonably talented players like Jamal Crawford the last two seasons in an effort to open up as much salary-cap space as possible. But if James and Bosh are indeed going to Chicago, moves like the ones the Knicks made will have been done at least partly in vain. The executive also said that the Dallas Mavericks were trying to join the Ohio meetings with James.”

Can it really be over before it even starts? I don’t know about you, but I’m not holding my breath.