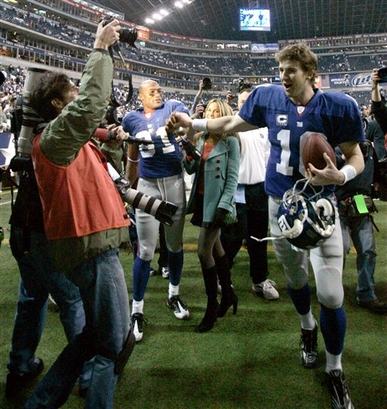 By Sam Rubenstein
Hello everyone. The basketball stuff is coming. It seems like only yesterday people were taunting me because of the Mets collapse. Water under the bridge. GIANTS!!! I don’t have thoughts, I’m just emanating rays of happiness.

I was pacing around, I was having heart palpitations, my hands sweating… it was frightening.

Saturday I just so happened to watch the end of the “NFL’s Greatest Games” highlight show of the Packers-49ers game where T.O. caught the pass from Steve Young to beat the Packers. I was out of the country when that game was played, so I never saw it. Watched it for the first time.

Giants-Boys came down to same thing. The team that was behind driving, needing a TD to win, TERRELL OWENS on the field, quirky running QB goody two shoes ready to make the big play… he threw it over the middle… needless to say, my heart leapt out of my chest and was sitting there on the coffee table for a moment. But then… RW INTERCEPTS THE BALL!!!

Oh the happiness! I was dizzy. Just an incredible day. What a time to be alive!

I have no thoughts on the game other than it was a team win, Romo blew it and melted down, and it feels good to be moving on! The sweetest popcorn topping is T.O. tears. Honestly, I was so stressed out in the fourth quarter I can’t remember half of what happened. I walked like 8 miles pacing back and forth. EVERYTHING WAS WORTH IT!!!

I LOVE LIFE!!!!
Okay, again the basketball stuff is coming. They showed the highlight of the Giants winning at the Knicks game, and the crowd gave them a heroes standing O, and it inspired the Knicks to destroy the Pistons in a blowout. Poor Isiah, the one time he leads his team to a big win deserving of praise, it will be buried in a little blurb in the back of the paper. Cause it’s GIANTS day. BLUE MONDAY!!!