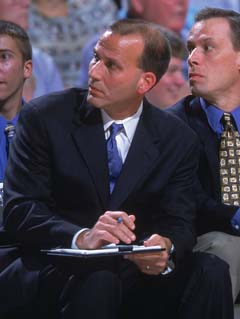 Bob Mackinnon Jr. might not be a household name for the average college and NBA fan, but if you poke around and ask some real basketball people, they know Mackinnon.

They might even know his father too, the three-time NBA Head Coach, twice with the Nets and once with the Buffalo Braves. Bob Jr. however, has been bouncing around the college circuit for over 20-plus years now, starting with smaller programs like Mercyhurst and Kings College, and then moving with Matt Doherty as an assistant from Notre Dame to UNC which included a NCAA title in 2005 with the Tarheels.

After that season Mackinnon took a position with the Lakers as a scout and associate director and was just recently offered his first professional head coaching position for the Colorado 14ers of the D League, an affiliate of the New Jersey Nets and Denver Nuggets.

The D League, founded in 2001, is expanding to 16 teams this season and has been sending more and more players to the NBA each year. Bob Jr. took a minute to talk with SLAM intern Matthew Eil to share his thoughts about the D League, his path to be a head coach, and the perks of coaching basketball.

SLAM: Bob, you’ve been an assistant coach for just about your entire coaching career, what are you feelings about becoming a professional head coach for the first time?

BM: As the GM and the head coach this is a really exciting time for me. It is such a great opportunity because the D League is one of the up-and-coming leagues in professional sports right now. I truly think the NBA is going to grab hold soon since the league is showing great promise. Hopefully in the next 5-6 years every NBA team will own a franchise and it will really be the minor league for the NBA.

SLAM: Your father was a coach for many years as we both know, do you lean on him for advice or do you have completely separate style.

BM: My dad and I speak just about every day and he has never been shy about telling me what he thinks. He told me last week when I got the job, ‘be your own man, you know the game as well as anybody. When you get in there, have fun and have the same passion you have always had for the game.’

SLAM: What do you see as being the biggest challenge this year being a head coach compared to being in the college game?

BM: I think every day is a new challenge that I look forward to and is a lot of fun. You get a chance to coach players and basketball at the highest level. I was a college coach for just over 25 years at some great programs, UNC, Duke, Notre Dame, Marshall and a few others. I think I have worked with players at a really high level since the beginning though and coaching basketball is coaching basketball. If you have the passion for the game, all that matters is that it’s basketball. I think it is the greatest game in the world, which we have been seeing with the “Redeem Team” in the Olympics, and I’m just excited to be a part of it all.

SLAM: You were also a part of the UNC Tarheel team that won it all in 2005, can I guess that was by far the coolest moment in all your coaching career?

BM: Actually not necessarily. My favorite moment is every single day in the gym with the guys. I love working with the guys and every day is a thrill. My greatest moment is what’s going to happen the rest of today.

SLAM: Your career is moving in the right direction, do you see being an NBA head coach in the future for you?

BM: I’m going to let that play out on its own. I’m much more concerned right now with doing the best possible job I can for the Colorado 14er’s organization and the D League itself.