Aiight kids, we’re here live and direct from Phoenix, about five rows behind the basket. These are the best seats we’ve ever had for All-Star. ot sure if that speaks to SLAM’s ever-increasing importance or the fact that nobody’s here this year to cover All-Star. Either way, we in the house.

• Just found out that Greg Oden’s not playing in the Rookie/Sophomore Game. Right now he’s sitting with Rudy Fernandez on the bench watching warm-ups. The two oldest Rookies in the history of this game, right?

• If I fall asleep while doing this live blog, please live with me. I’ve slept about 4 hours total in the last two days — didn’t sleep at all last night in the airport in DC. Not a fun night.

• Apparently Oden injured himself when he bumped knees with Corey Maggette in the fourth quarter of the Portland/G-St game. It took him a few months, but Maggette finally made an impact.

• Cedric Ceballos is the emcee for tonight’s event. I wish they handed out blindfolds to everyone.

• One-half of the lower section of stands here is filled with screaming teenagers wearing pink T-Mobile jerseys. The rest of the stands are pretty much empty. Hopefully TNT puts the cameras on the opposide side of the court so the seats look full.

• I just switched the TV on our table to TNT to see what was on and it’s Alyssa Milano talking on the phone wearing a belly shirt. I briefly thought it was Embrace Of The Vampire before realizing it’s an episode of “Charmed.” Crap.

• I’m so tired I feel like I’m drunk. These notes could be awesome.

• Ben’s thrilled about the mascot dunk contest happening right now. I heard Bennie the Bull was at that party with Michael Phelps.

• The Rookies are on the floor. Marc Gasol just popped the head off one of hte little kids in the stands and drank their blood. It was kinda graphic.

• I was just thinking that the Rookies might actually be older than the Sophomores, considering they have Marc Gasol, Rudy and Oden. Then I saw Luis Scola on the Sophomores and realized there was no way the Rookies could be older.

• If Al Horford gets injured in the game I’m gonna be pissed.

• OK, finally, time for tip-off. Cedric Ceballos actually just asked all the kids to scream when the TNT broadcast starts. Not sure what’s up with D-Wade’s outfit.

• Wade’s pretty good at introducing the players. I was really hoping he wouldn’t know who one of the players was. Dwight’s even better than Wade, mainly because you get the sense Dwight does this all the time when watching games at home.

• For MVP, I’m going with Kevin Durant. He kills guys ten years older than him all the time, so why shouldn’t he be able to dominate this game?

• I think these guys are wearing 3D socks.

• Gasol came out hacking! Eric Gordon is going to score all the ponts for the Rooks.

• Wade looks like he got dressed in Cornell West’s closet.

• Horford’s out already. Good. Get that man out of there and let him rest. 13-7 Sophs.• Just noticed we’re playing 20 minute halves here. Whatever hurries this thing along, I’m all for it. These kids seem to really be enjoying themselves. I can’t hear out of my right ear. Thanks NBA, but I might pass ont his game next year.

• I think Bennie the Bull just slung some product during the break.

• Wilson Chandler should be good for this game since both teams seem to be using Mike D’Antoni’s defensive philosophies.

• The kids started chanting something that sounded like “Rock-et!” I briefly thought that Roger Clemens might be here.

• Bull Lopez puts the Sophs up 10 with 7 minutes to go in the half. Dwight Howard has a lot of coaching to do.

• That new Jordan commercial is a little derivative of the opening of Saving Private Ryan, right?

• Amare/é/’e just made an appearance and the kids screamed. Then they traded him.

• Oh no, at halftime Corbin Bleu from High School Musical is going to perform. Some of these kids might pass out.

• OJ from way downtown. Rookies are up 8 and SLAM Rookie Diary Keeper Eric Gordon has a decade.

• Dwight burns a 20 down the stretch. Come on, Dwight. Let the kids play.

• Arash just gave me the SI Swimsuit Issue. I’ll be back in about ten minutes.

• Rooks up 70-63. I think Dwight’s more concerned with Dwyane’s T-Mobile party in a few hours.

• Just found out from NBA PR big guy Brian McIntyre that I’m on the MVP panel for this game. Better put down the swimsuit issue and start watching. Think they’ll be mad if I vote for Al Horford?

• Durant tried to lob it off the glass to Aaron Brooks, who apparently can’t dunk.

• If the Thunder want me to vote for Kevin Durant, Clay Bennett better show me the money. Also, I can’t vote for Rudy Fernandez because the Blazers aparently send out mad swag but never send any to the SLAM Dome.

• Bang! Another KD three (his third in the last minute) makes it 89-87. I think he just set the scoring record for this game with 12 minutes to go.

• They just did a think on court about kids being active and it was sponsored by flavor-blasted goldfish crackers.

• Chris Bosh in the house.

• Aw man, I just missed that new T-Mobile commercial with Barkley and Wade and Dwight. I wonder if they’ll replay it?

• If Al Horford makes these free throws and ties up the game he’s an MVP candidate in my book. First, good. Second…good! Tie game! 89 all…

• So who do you guys think should get my vote as MVP? Durant if they win, right? And I’m thinking Gordon if the Rooks take it. Any arguments?

• So now KD has the record with 37 pts. BTW, Amare has a restaurant across the street called Stoudemire’s. I want to go there and order the microfracture salad.

• Rudy Fernandez puts a little too much serrano on a layup and misses.

• Out of the timeout the Sophs get Jeff Green free on a curl and pounds the dunk. OJ misses an ill-advised three.

• OK, I dont look dumb (at least not because of my vote). Durant with the tomhawk reverse! Then he goes to the line and hits two to give him 46 points.

We’re gonna run, but we’ll be back either late tonight or at some point tomorrow with notes from all the events tonight. Later… 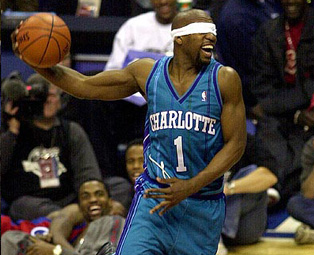 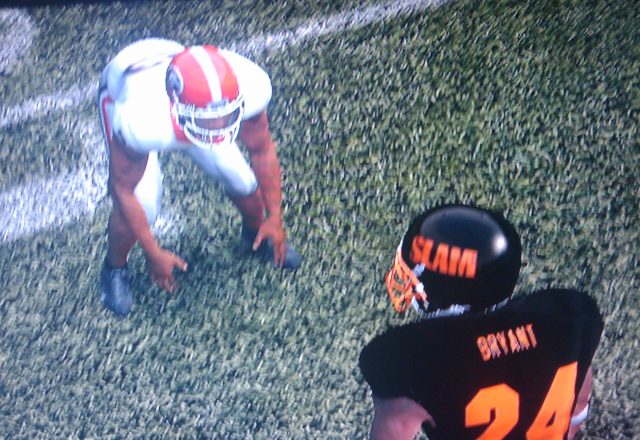 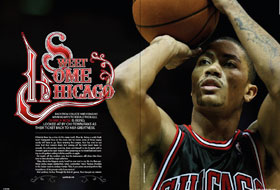 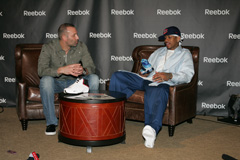 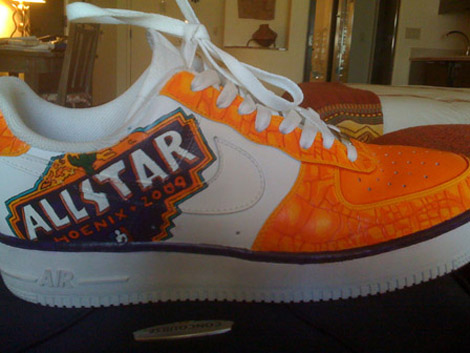 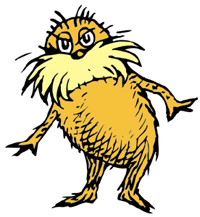