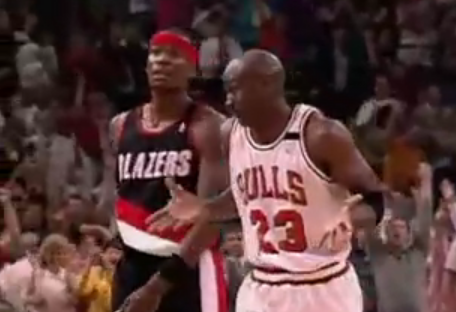 • First off, Tupac was apparently at the Celts game the other night. Love that he was wearing a Steph (or Antoine Walker) jersey.

• Just got an email that the NBA had their tiebreaker drawing for the Draft today. It shook out like this:

This means the Lottery order breaks down thusly…

Maybe Ricky should stay in Spain after all.

• Henry Abbott has an epic post today on TrueHoop about basketball and the hot hand, specifically citing a recent study that seems to assert that there is no such thing as a player being hot.

When they got to the key point, the findings were powerful. Sandy Weil summarizes it in an e-mail: “What we found is that, contrary to the existence of the hot hand, the 49 prolific shooters in our sample are less likely to make a shot after a made basket than after a miss.”

You get that? If your guy has just made a shot, it slightly decreases the chance that his next shot will go in.

“We found this effect stronger if the player made a jump shot on the previous shot than if they had made a non-jumper (mostly layups and dunks). The average of the players in our study shoots about 46.7% on a shot after missing his previous shot. But if he made a non-jumper, he’ll shoot around 45%. And after a made jump shot, he’ll shoot around 43.3%,” explains Weil.

So what that means is that if you’re looking for the guy most likely to make the next shot — what any coach would want in a late game timeout — this survey of nearly a million shots taken by great scorers suggest you’re slightly better off going with the guy who missed his last shot.

I get that. If NBA players were more likely to make a shot than miss a shot after a made shot, they’d all be shooting like 75 percent, right? It’s like playing blackjack and betting more after you get a bad hand, because you suspect that you’re more likely to get a good hand coming up.

Henry sums it up with…

In other words, counting on the hot hand was always dangerous. Actual basketball strategy is far superior. That was true before this study, it’s still true after, and that’s something we really know.

Agreed. And if I’m reading the post right, the main point of all this is that an offense trying to force shots from a player who is hot — I’m sorry, “seems to be” hot — is a bad idea, because there’s no such thing as a hot hand if players are more likely to miss than make a shot after a make.

It’s an interesting notion. But I kinda wish those guys didn’t come up with that research to prove the hot hand doesn’t exist, because I think that means this never happened:

• The big story in New York this week has been the opening of the new stadiums for the Mets and Yankees. The Yankees spent $1.5 billion — yes, billion — on their new stadium. Having been to the old Yankee Stadium a few times, I agree that a new stadium was needed, because the old Stadium was, well, old, with crowded hallways and crumbling infrastructure.

What’s odd, however, about the new Stadium is that, at least on TV, it looks EXACTLY THE SAME as the old stadium. The outfield walls, the foul territory, even the placement of the cameras — it’s all completely identical to the old Stadium. For a team with so much tradition and history, I understand not wanting to completely change things up, but when you spend $1.5 billion on a new stadium, it might be worth your money to make it look like you’re playing in a new stadium.

At the risk of riling up any Mets fans, I’d like to congratulate the Mets on putting together the most hilarious new stadium opening in recent memory. First, the national anthem for the first home game in the new stadium was performed by…a New York icon? Billy Joel? Bruce Springsteen? No, the cast of West Side Story.

Then, Jody Gerut led off the game for the Padres against Mets starter Mike Pelfrey. I was watching live and thinking, OK, first pitch, new stadium, lots of pressure and excitement—Pelfrey is definitely going to try and throw a strike right across the plate to start out. So if I’m Gerut I’m swinging for the fences on pitch one, right? Well, Gerut took the pitch, which was a fastball, belt-high, right across the plate. I was thinking, There was your chance to ruin the home opener! Gerut took the next pitch for a ball, then, with a 1-1 count, pulled the next pitch down the line for a home run. Welcome to CitiField, everyone!

The Mets dramatically battled back to tie the game, until the Mets’ expensive and vaunted bullpen balked in the winning run, and then the Padres went to their bullpen and brought in Duaner Sanchez, who was cut by the Mets in spring training, and Heath Bell, who the Mets traded a few years ago, to shut down the Mets and ruin the home opener.

I, however, really enjoyed it.

(Meanwhile, my Braves are all injured again. Yunel Escobar, our dope shortstop, got hurt yesterday jumping up and down in the on deck circle. Really. Sigh.)

• I hope you guys caught “30 Rock” last night. I’ve only pimping that show here for oh…three years now? Last night’s episode had a great NBA reference: Tina Fey’s character had to take a seminar on sexual harassment in the work place, and NBC distributed booklets to all the employees about sexual harassment. Someone asked Tracy Jordan (Tracy Morgan) if he was going to read it, and he said, “I don’t need to. The whole thing is loosely based on an evening I spent with Isiah Thomas.”

• OK, onto the Playoffs. Ryne spent the last day matching writers with the different series, so once again we’ll have the Playoffs covered every which way but loose. Surprisingly, I’ll be on top of the Hawks/Heat series. I can’t make it to ATL this weekend for Round One, because we’ve got too much work left to finish up on the new issue of SLAM, but I think I’ll hit Games 3 and 4 in MIA. And my main man DeMarco Williams is going to be at the games in Atlanta for SLAMonline, so we’ll have notes, anyway.

I wrote an extensive series preview yesterday for Hawks.com, which you can check out here.  (Yeah, you have sign up on the site, but it’s free and you don’t get inundated with email.)

Basically, I think the series is Atlanta’s to lose. Just going through the match-ups, Atlanta’s better at every starting spot except the 2 (and I honestly don’t think Joe Johnson gives up that much to Wade). Miami has a deeper bench, but the Hawks have better players available. And the Hawks have home court. So I’m taking Atlanta in this one, in 6.

• And because I went 7-for-8 on the first round last year, I’ll give my quick first round predictions for this year as well:
Cleveland-Detroit: Cavs
Boston-Chicago: Boston
Orlando-Philly: Orlando, though I think this might be the most exciting series of Round One, maybe even 7 games.
Lakers-Jazz: LA
Denver-New Orleans: I’m thinking New Orleans is going to extend George Karl’s first round woes.
San Antonio-Dallas: Dallas finally ends San Antonio’s every-other-year trips to the Finals.
Portland-Houston: Houston

• That’s it for now…let’s get the Playoffs started! Have a great weekend…I’ll be twittering during the games. If I don’t get inspired and post something here on SLAMonline.com this weekend, catch you guys next week…