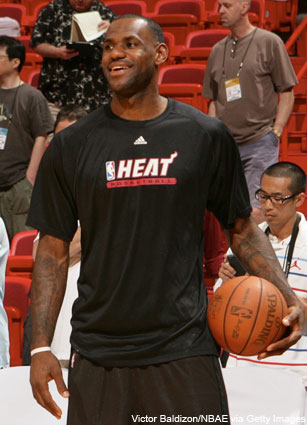 So Tuesday I woke up at 5:00 AM over on the Florida panhandle, then flew to Atlanta, then to Miami, then checked into the hotel, then busted it over to the Arena for Game 1. By the time I got back to the hotel Tuesday night it was 1:00 AM, I’d been awake all day, and I had no trouble getting to sleep.

Waking up Wednesday morning was a little tougher. I had to be over at my main man Sekou Smith’s hotel by 9:30 AM to tape the latest Hang Time Podcast, with a special guest who I figured might be upset if I overslept: David Stern.

Sekou and I spoke to the Commissioner Stern literally minutes before he went in to the latest collective bargaining session, and he had some interesting stuff to say about what might happen this summer.

You can download the entire podcast here, or subscribe via iTunes. Or you can just listen below via the flash player:

After that, just around noon with the sun beating down, the assembled media assembled at AmericanAirlines Arena to discuss last night’s game with all the players.

The Heat took the floor first, although Wade, Bron and Spoelstra went to the interview room and handled their business there. Spo made it clear that Miami wasn’t taking anything for granted. “We have great respect for what they did and what they’re capable for offensively. They did miss some open shots. We affected some at times, but they’re a dangerous offensive team with the skill level and shooting ability and the passing ability they have. So we have to be on edge.”

The Heat players all credited their “string” defense, how when one guy moves all the others move with him to help cover for him. (I think “rope” would sound cooler, but maybe that’s just me.) “This is the most challenging offense we’ve played in this postseason,” said Bron, “because of the firepower that they have offensively.”

(By the way, this Erik Spoelstra feature by Kevin Arnovitz is really great. Read it.)

The Mavs came next. “They won the line of scrimmage is really what it came down to,” said Rick Carlisle. “They were more physical inside. It led to 16 second-chance opportunities for them. And that just takes the ball out of our hands and it gives them another chance to keep playing. We’ve got to do a better job of scrambling and getting bodies on bodies, and we have to come up with the ball.”

Dirk downplayed the injury to his finger, saying it might be problematic when dribbling or swiping at the ball, but that it shouldn’t mess with his shooting touch.

REPORTER: You guys have 100 games or so under your belt. After losing Game 1 of a seven game series, how tempting is it to make a lot of adjustments? How many adjustments will you make?

Rick Carlisle: We’ll make some adjustments for sure.

After the hour of media availability, I was in the hallway under the stands talking to Mike Lee and John Schuhmann about which ‘90s R&B groups the Heat and the Mavs are most like. Schuhmann went with Jodeci for the Heat, and we were just starting to talk about who the Mavs might be (After 7? Color Me Badd?) when some dude walked by and said, “Shaq retired.” We all immediately whipped out our phones and went to Twitter and saw Shaq’s tweet that he was, in fact, retiring.

I walked out to grab lunch with my main man Pascal Giberne, and as we walked I thought about Shaq. The first time I had the chance to talk to Shaq was in the spring of 2001. Shaq and Kobe had been slyly beefing for a while, and he agreed to sit with me and do a Q&A. I flew out to L.A. and went to a Lakers practice, and after everyone had cleared out, Shaq came out and sat with me on the bleachers in the empty practice facility. He was just so, so massive, and when we shook hands, his hand completely enveloped mine. Even though we were the only people in the room, Shaq spoke in that quiet, hushed voice, and when I asked him the first question, his answer was so quiet that I was afraid my tape recorder wouldn’t pick up his response. Shaq must have noticed the worry in my face, because he immediately reached out, took the recorder from me and held it right up to his mouth for the rest of the interview.

After that, I’d see Shaq a couple of times a year, at NBA events or games or whatever, and he’d always make a moment to speak. The most recent official Shaq interaction I had was in 2007, when we did the Shaq/Dirk Sin City covers. We did the Shaq shoot under the stands there in Miami, in the exact place where I was standing when I heard Shaq was retiring. We talked for a long time that day, about a lot of stuff. For instance…

Shaquille O’Neal: No, no. Because my life is how I programmed it to be. As a youngster I used to sit there and watch everybody. When you’re building your character, sometimes you can build it from scratch or sometimes you can cheat. I cheated. I took a little bit from everyone. I took a little bit of Ewing, Robinson, Hakeem, Jordan, the smile of Magic, plus my own juvenile delinquency. And there you have me.

We talked for over an hour, and before Shaq left, we spoke a little about his legacy.

ME: Do you think the NBA has fallen off from what it was back when you were a kid?

SHAQ: It’s different. When I was coming up, every team had a star. Every team doesn’t have a star now, and then the guys that they try to make stars aren’t really stars all the time. I think you have to make yourself a star and not have people try to make you a star. I think if you make yourself a star you’ll be respected. I’ve been in 15 years, and I get respect in every arena. Sometimes they boo, sometimes they clap. I killed every ninja in front of me to become the Shogun. And that’s just how I did it.

ME: Are you still the most dominant player in the League?

SHAQ: Most dominant? Yeah. I don’t really get to showcase a lot of that because of the defenses, but yeah, I am. Everybody talks about Ming, but I’m the Shogun and he has to go through me in a championship series to take my crown. He just can’t outscore me one or two games and then say he’s the best. It don’t work like that.

ME: You still think you’ll keep playing until your contract is up in 2010 and then that’ll be it?

SHAQ: Probably. I mean, I’ll be 38, I don’t know. But again, if somebody makes me an offer I can’t refuse, I might can do something.

ME: Where did the nickname Diesel come from?

ME: Well, no, I didn’t know that. But to be honest I’m not sure you’re right about that, either.

SHAQ: Look it up on the internet. I know you don’t believe me. You’re sitting there like, “What the f*ck is Shaq talking about, bullsh*tting me.” I didn’t know it either; somebody told me that. It was just a name I always had, Shaq Diesel, because I’m like a truck, a big ol’ truck with no brakes, and I can’t be stopped.

Until today, I suppose.

I know Shaq had his haters, but he was my era’s don dada. And I, for one, thoroughly enjoyed the ride. Thanks for the memories, big fella.

(By the way, Shaq was right: Diesel fuel isn’t flammable, though it is combustible.)

Catch you guys tonight for Game 2.