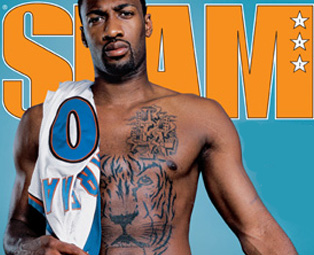 When I first started working at SLAM, I used to wear a t-shirt to work pretty much every day. Shorts, sneakers, hats, jerseys — I dressed for each day in the office like it was a Saturday and I was heading to a sports bar. Because I could. Nobody told me not to. Ninety-five percent of the time I spent my day sitting at my desk and seeing the same dozen people over and over.

The problem was that other five percent of the time. Occasionally people would show up out of the blue. Agents, players, PR people, company owners. In some respect, they didn’t really care how I was dressed, but it did make some immeasurable difference.

One day I remember coming in wearing a hat and a t-shirt and, totally randomly, the BBC called and asked me to appear live on their nightly news to talk about the Kobe Bryant court case, and I had to spend about ten minutes sorting through the drawers in my desk looking for a sweater or something more presentable to wear on international television.

Since then, I’ve learned to make an effort. Now I wear a shirt with a collar every day, even in the summer. I still wear my Braves hat, but I can remove it with minimal collateral damage. Basically, I want to present the best version of myself every day, because you just never know who you’re going to meet or what opportunity you’re going to come across on any given day.

I don’t like doing this. If it was up to me, I’d wear t-shirts and sweatpants to work every day of the week. I want to be true to myself, dress the way I want to dress, but I recognize that there are societal lines I am not immune to. Perhaps one day my ability to arrange words in a certain order will improbably translate into a billion-dollar industry for me, at which point I will be able to be above initial perceptions. But for now, I’m a part of it, whether I like it or not.

The lesson here is that sometimes you have to do things you don’t want to do for the benefit of other people. Which, generally, sucks for me. But it’s absolute truth in every facet of life. I don’t want to clean up the bathroom at home, but if Wifey asks me to do it and I don’t do it, it makes our relationship more difficult than it otherwise needs to be. Does it really make a difference to the world around me if my sink hasn’t been scrubbed in two weeks? None whatsoever. But it does make a difference to my wife, and her level of happiness makes a direct difference in my life. So I scrub the sink.

This seems to be a life lesson that Gilbert Arenas hasn’t completely grasped. Everything we do, every decision we make, has an effect, long-term or short-term or both. Maybe he’s never had to grasp it. Maybe it’s why he wasn’t picked in the first round of the NBA Draft. Maybe it’s why he’s not playing basketball right now.

I’ve generally found an unwillingness to conform an endearing trait in many people, specifically athletes. It’s what makes the rebels fun to follow. And it’s what made Gilbert Arenas so much fun. We could expect the unexpected from Gilbert. He said things other players wouldn’t say, did things other players wouldn’t do. And that’s all great, great stuff. That’s entertainment. But there’s a difference in being a non-conformist and in being obstinate, and over the last week, Gilbert crossed that line.

Regardless of what did or did not happen, there was one correct way for Gilbert to handle the situation he found himself in which would have resulted in him keeping most of his money and maximize his time on the basketball court: Shut up other than to apologize and then play basketball. Let the system run its course. Basically, stop being Gilbert Arenas, at least for a while. Maybe you are completely innocent, maybe you are as guilty as can be, but let those things play out in front of you without commentary. Because in a worst-case-scenario, you could actually make public perception worse. Which is exactly what happened.

I understand humor as a coping mechanism. I do. Anytime things get too serious for me, I crack a joke. Or, when I really want to make everyone laugh, I rip a huge fart. (I was kidding, but see, that was funny.)

Employed correctly, humor is a great equalizer. It deflates tension, smooths things out. But a bad joke is about the worst thing someone can drop into a tense situation. Think about how in nearly every action movie there’s a scene where something’s about to pop off, and then someone cracks a joke nobody laughs at. Gilbert was that unfunny joker, over and over and over again over the last week. He seemed to be trying to swing for the fences time and again, but swinging and missing every time. It was as if he felt that eventually, one of these jokes would connect and everyone would remember, “Oh, this is GILBERT ARENAS we’re talking about!” But the situation was too far gone for Gilbert to do anything about it.

I’ve seen a lot of people upset about Gilbert’s indefinite suspension, saying that David Stern is being too harsh in light of the penalties that other guys who’ve had gun incidents — like Delonte West or Stephen Jackson or Sebastian Telfair — received. But there’s one huge, immediate difference that should be obvious to everyone: Every one of those other guys immediately issued copious apologies and then went silent. They didn’t tweet incessantly, they didn’t attempt to engage every rumor, they didn’t say that David Stern was a mean person, but most importantly, none of them pretended to shoot their teammates during the pregame introductions!

By far, the most important word in David Stern’s statement was “ongoing,” as in it was Gilbert’s “ongoing conduct [that] has led me to conclude that he is not currently fit to take the court in an NBA game.” Basically, Gilbert didn’t know when to say when, and he didn’t seem to have anyone around him able to convince him that it was time to say when. So David Stern said it for him.

Gilbert told the Washington Post that he’d like the chance to talk to Stern. “I just want to remind him of who I am,” Gilbert said. “I’m the kid who jumped off the trampoline at the all-star game, the kid who throws his jersey to people in the stands. I’m not the hoodlum that’s being written and talked about right now.”

Look, Gilbert Arenas made some terrible, no-good, very bad choices. That doesn’t mean he’s not the guy who called himself “Hibachi” and got a tiger tattoo on his chest.

Most of us remember the other Gil, the one we all loved and had fun cheering for. Maybe the best way to make sure everyone focuses on that guy, and the best way for Gil to keep his job going forward, would be if he stopped trying so desperately to remind us.

A lot of people made their initial perceptions of Gilbert Arenas, and most of those perceptions were positive. As Gilbert’s finding out now, pleasing everyone is really hard, maybe the hardest thing for a person to do.

But that doesn’t mean it can’t be done. Or at least, you can’t try really hard to do it.