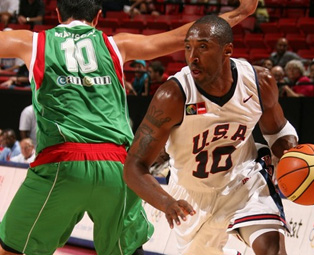 So, I’ve been letting The Links rest a little the last few weeks. We’ve been really busy here at the office, doing Kicks and then SLAM 112 nearly back-to-back, and I’ve been involved in getting all of that done while writing a lot of stuff for the magazine, too. And then I’m heading out of town again later this week, so you’ll again be briefly Links-less. Hopefully you don’t notice and don’t care, because there’s so much other great content going up every day. Anyway, when I get back next week, I’m gonna start cranking up The Links again.

With things finally slowing down at work, I thought I should stay up late and do some game notes for Team USA versus Mexico, the team I thought had the best chance to develop some momentum and maybe get some attention from the hoops cognoscenti. There’s the novelty of having a “name” coach in Nolan Richardson, the gimmicky “40 Minutes Of Diablo” playing style and, to be honest, that huge white afro Nolan’s rocking these days. I also already wrote about my love for Mexico center Horacio Llamas, who has the body of John Goodman and the style sense of Turtle from “Entourage.”

• The opening of the ESPN2 broadcast looks like it was produced by the Bristol H.S. A/V Club. We get the point, that the US has mostly crapped the bed the last few years. But don’t ask us “Who will lead the charge,” because it’s mostly the same guys on this team that blew it last year. Well, except for Kobe and Kidd.

• Coach K switches it up and goes with Billups and Amare in the starting five, along with regulars LeBron, Melo and Kobe.

• Amare’s wearing a band-aid in a weird position on his ear, like over the middle of it. Llamas is wearing a headband, two sweatbands, a tape wrap around his right hand, kneepads and socks to his knees. Accessorize!

• Bill Walton says Mexico has always been known for their quickness and point guard play. Lou Pinella just reached for his wallet.

• Horacio! Llamas! He just took Amare straight off the dribble to the hoop, but he couldn’t jump and he missed the lay-up.

• On a lot plays, Llamas just ends up standing still as everyone runs past him in either direction.

• Mexico goes to a zone and Melo drains a three over the top. Then Kobe nails the same shot on the next possession. 18-11, USA.

• Lamas gets isolated on the wing against Amare, and for some reason the rest of the Mexican team clears out. (Hopefully the misheard the play call.) Lamas takes a dribble to his right, then tries to go behind the back with a dribble. This confuses his own body so much that he ends up falling over onto his butt and turning it over. Nolan Richardson takes him out.
• Bill Walton is just gushing about Kobe tonight.

• Don’t forget about this guy: LeBron catches on the free throw line extended, holds the ball briefly and then, against 3/5ths of Mexican zone, just runs right to the rim and tomahawks on some power forward.

• After years of people complaining about Team USA needing to go back to fundamentals, it’s sort of ironic that following this game tonight on ESPN2 will be “The And 1 Mix Tape Tour.”

• Amare just doesn’t seem as explosive as he was last year, does he? Is it just me? He’s scoring a lot of points, but he just seems tired or something.

• USA lobs it inside to Howard and Llamas just grabs him. If a chair had magically appeared on the court at that moment, Llamas would have immediately taken a seat. The man is completely exhausted.

• For a Nolan Richardson team, Mexico sure don’t seem to run very much.

• Bill Walton: “Watching this team play is like watching a great bicycle race team.” He couldn’t have said that any better.

• Mike Miller just stabbed someone with a trident.

• As the game goes to a commercial, Walton wonders aloud, “The question is, what adjustments can Mexico make?” How about leaving and heading for the tables right now?

• I hate to talk about it, but you guys might remember how last summer I came back from Vegas talking about how amazing Carmelo was playing? How he was playing more complete than I’d ever seen him play? Well, he kind of settled down during the NBA season (and he punched out Mardy Collins), but he’s looking like an all-timer again this summer. He’s got 16 points in the first quarter tonight. I hope I didn’t just jinx him or something.

• OK, the first quarter is over. 45-23 after one. I have a feeling I’ll be analyzing a lot of Bill Walton from here on in.

• Mexico works the shot clock, misses a shot and gets an offensive rebound, works the clock and misses a short jumper. Then the USA gets the rebound, makes two long passes and gets a layup within about 3 seconds.

• The US just went up 24 points…and inserted Kobe Bryant into the game.

• Llamas!! I think he just polished off a pizza and large order of nachos while on the bench.

• Kobe drives and Llamas swats the shot! That’s what a rested Llamas brings to the game.

• Should Tyson Chandler feel left out because the US is up 22 and he still hasn’t gotten into the game?

• On an unrelated note, I hope you guys are watching “The Flight of the Conchords” on HBO. It’s just two dumb guys that get into the same situations over and over (girlfriend issues, band-related arguments, etc). But it always makes me laugh. The scene on Sunday night where they were at dinner with Stefan Gucci had me in tears.

• Do you think Mike Miller ever looks around out while he’s on the floor and thinks to himself, “Holy crap, how in the world did I end up on the Men’s National Team?”

• Speaking of HBO, I can’t wait for that Justin Timberlake concert to air just so I can stop seeing the ads for it.

• If I was an NBA ref, the thing that would bother me the most about the Tim Donaghy mess would be that the NBA refs could never hold their annual convention in Vegas ever again.

• Mexico just cut it to 17 with 1 minute left in the first. Then the US scored, pretty easily.

• Bill Walton: “Jason Kidd, he is running a pure meritocracy out there.” I ran one of those myself one time, but only after I ate some really bad sushi.

• Both teams have 8 turnovers at the half. However, only one team has a legitimate chance to win the game.

• “The Bronx Is Burning” series finale airs tomorrow night on ESPN. Here’s my prediction: The Yankees win the World Series and Reggie Jackson hits four home runs in a row.

• About Michael Vick: He says he did it, so I will publicly pass judgment and say that I think he did a reprehensible thing. But at the same time—and maybe I’m a sucker or something—I thought he seemed pretty transparent and regretful today at that press conference. So if he can get his act together, I say give him another chance. But that’s only if he really changes, and I’m not sure how anyone can accurately judge that.

• Amare just opened the second half with a vicious tomahawk over Mexico’s power forward. I think he found some explosiveness. Then he ran down and committed a dumb foul against Beck on a tough jump shot.

• Llamas! He nailed a long two over Amare.

• Bill Walton is talking about playing basketball in Tijuana and then hanging out in a bar with Carlos Santana. He said at the bar “we’d have a real good time.” When John Saunders presses Walton for details — and at that moment I thought to myself, Thank God for John Saunders — Walton responds, “Well, tacos…” Tacos, indeed, are always a real good time. Especially when you sprinkle a little mesca…never mind.

• KOBE! A windmill in traffic right on that same power forward from Mexico that everyone’s dunking all over. ESPN won’t tell us what the guy’s name is. It might be Dios Mio.

• OK, you folk who think I’m a Kobe hater: Walton and John Saunders just talked ad nauseum about Kobe’s incredible defense in this tournament, about how he’s shutting down every team’s top player, etcetera, etcetera…and then a minute later they show in a graphic that Beck, the guy Kobe’s “shutting down” tonight, has 17 points and we’re still in the beginning of the third. Is that hating for me to point that out?

• By the way, while I was in Vegas I ran into one of the US assistant coaches in one of the bathrooms, and I noticed he didn’t wash his hands after taking a piss.

• Bill Walton: “This has been the best WNBA Playoffs I’ve ever seen.”

• Here’s an interesting stat I just stumbled across at the USA Basketball website: Through the first four games of this Tournament, Jason Kidd has taken a total of 3 field goal attempts.

• Beck just crossed over Kobe and drilled a jumper over him as Kobe recovered in time to foul him. Shutting him down! The US is up 92-75 with 2 minutes left in the third. Mexico is hanging around, keeping it within 20.

• And Mike Miller is on the board! A layup with 1:40 left in the third gives him his first bucket of the night.

• Bill Walton says that Mexico accounts for one-third of Gatorade’s international sales. I have no idea whether or not that’s true but I suspect that it isn’t, mostly because Bill Walton said it.

• Mexico isn’t going to win this game, but 78 points through 3 is more than anyone else has scored against the US through 4 quarters thus far.

• After 90 seconds, Llamas is removed from the game, totally gassed.

• I’m not sure what else to write about. I could totally write 3,000 words about Season 3 of “The Hills,” the second-funniest show on TV right now, but I think I’ll save that for another post.

• Here we go. Now Bill Walton’s talking about the Baja Peninsula, the Sea of Cortez and rattling off the names of various coastal Mexican towns. He’s also vaguely talking about taking road trips down there, I guess when he was in high school. This is incredible stuff. I can just imagine the look of exasperation on Luke Walton’s face after a big family dinner, as Bill Walton, perhaps tipsy on red wine, is unable to stop telling stories about his gallivanting, adventurous youth. He’d probably be wearing a tie-dyed shirt. And a bandana, too. I love Bill Walton.
• Man, I wish we’d invited along Bill Walton for that night in Vegas.

• Whoa there’s a guy for Mexico even more out shape than Llamas. He’s number 15 and he’s huuuge. This adds a fun wrinkle for the last 3:39.

• Oh, never mind. He’s just wearing a baggy jersey. The score is USA 121, Mexico 93. This is my version of an announcer killing time.

• The US is up 29 and Deron Williams is playing fullcourt defense. Take it down a notch, kid.

• 127-100. Over! Team USA is going to win this tournament, and people will credit Coach K for rebuilding USA Basketball. Really, though, it’s mostly that they added JKidd and Kobe.

I’m going to watch some And 1 Mix Tape shows now.