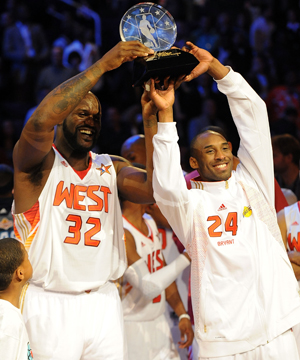 Sunday night and we’re ready to get it crack-a-lacking. Let’s go!

• About an hour before tipoff I was walking around under the stands and walked past the press room and heard someone speaking. I walked in and found Sen. John McCain stading there talking to about 10 reporters, so I walked up and listened in. When someone asked him to choose his favorite player in the NBA, I heard his wife, Cindy, groan, as if she knew there was no way for him to answer and keep everyone happy. He answered but gave a couple of choices. Once a politician, always a politician.

• Love that TNT is preceding the All-Star Game with The Rock. Fantastic movie.

• Everyone’s  ready to go, it seems. Just caught up with Ernie Johnson who says he’s feeling great and sends his best to SLAM’s readers.

• The East just came out to shootaround to “Roc Boyz.” L’chaim! I’m guessing nobody at the NBA knows what that song’s about?

• The West came out to the more conventional “Bring ‘Em Out.”

• Melanie Collins is not a game.

• Craig Sager drank a bottle of Pepto-Bismol and vomited it all over his jacket. I think the color of his jacket should be called Pepto-Abysmal.

• Aiight, had some techincal difficulties there, mainly because I’ve been using the same laptop for the last 5 years and now it would just be faster if I used an Etch-a-Sketch instead of this thing.

• Dwight welcomes the crowd. “Hey y’all! We gon’ have some fun!” He’s been watching too much Paula Deen.

• And he hits a three off the bat. Nice.

• Dwight said, Hello Tim! Wade with a crazy dunk from the wing. Bron again. 16-6 early on.

Weird stuff is happening…my computer is slower than Shaq tonight and I can’t get a wireless signal. So I’m out You guys want to keep talking it out in the comments, go for it.

I shoulda got a PC.

• I’m briefly working again. Everyone loves Bill Russell — except for me, because when I was a kid and asked for an autograph he said no and was really a jerk about it. And now he sells his autographs. Classy!

Aiight, even though my computer kinda died in the first half, I’m gonna keep on taking notes and add them later, or as my computer deems ready.

• Halftime. John Legend and Juanes. If you’re out there, play a faster song, please. Zzz…

• Uh-oh, he just went to a faster song…that nobody knows.

• Jimmy O’Donnell and Brian Benson, if you’re out there…hook a dude up.

• One advantage of being here live: I can’t hear Reggie Miller.

• BTW, someone told me that Luis Scola is rolling completely posse-less out here and has been seen a few places (hotel bar, Hooters) sitting alone and eating or having a drink.

• Redeem Team tribute…to “Bittersweet Symphony.” Kinda cool to see them all here together…well, most of them. Now Coach K is on the scoreboard with a  video tribute to Redeem Team. He also urged them to buy his latest book and to use the products he endorses. LeBron’s cutting up during Jerry Colangelo’s speech. I wish Colangelo would snap, “HEY! PAY ATTENTION, DAMMIT!”

• I’m testing out sitting in Ben’s seat instead of mine — perhaps I was in a dead zone?

• We have better seats for the NBA All-Star Game than we do for a regular season Knicks game.

• Donald Faison bricked a couple of threes at the end of the half.

• Second half opens with “Crazy Train.” The East has a ways to go here.

• AI begins the second half by shooting a layup over the backboard.

• The West is actually running plays. Iso for Yao Ming and he hits over KG.

• LeBron! With the shot he almost dunks, gets fouled and then does a lefty windmill layup!

• I was talking with Mike Grange from the Globe and Mail last night and he said he thinks LeBron still has a ton of upside — thought he could be averaging 34 or 35 easy. Just saying.

•Dwight just threw a shot from Duncan into the third row. Any block that impressive shouldn’t be considered goaltending.

• It’s sorta fitting that Cindy McCain is sitting next to Eva Longoria, isn’t it?

• After Duncan threw that pass two feet over Yao’s head he shrugged and tried to give him five — and they missed that, too.

• Yao and Dwight go down in a tangle. We hear the people in Orlando gasp from here. They’re both fine.

• The Kiss Cam segment included Jay and Beyonce. Beyonce gave the camera the stink eye and Jay held up the dynasty sign. Really. Mediatakeout will have a whole post about that tomorrow.

• Shaq is back and scores. Mo Williams for three.

• Kobe makes a layup and screams “Oh sh*t,” which gets picked up on the mics and broadcast throughout the arena.

• Shaq iso’s on Dwight Howard and hits CP for a long two.

• Shaq pulls the give-and-go with Chris Paul which the East kinda lets happen. Shaq’s like the oldest guy in the Teacher-Student game who the crowd is cheering for.

• Now that I’ve got internet access I’m afraid to move my computer at all. The problem is that I’ve got it in my lap and it’s searing a burn into my left thigh. I’m live-blogging this game even if my pants catch on fire!

• Corbin Bleu is here again. Can we just call him Corbin Bleh?

• The West players came out of the timeout and I swear I saw Chauncey texting someone.

• Joe Johnson is back! I just want him to score at least 1 point.

• I love Shaq, but he manages to disrupt he flow of his own team’s offense even in an All-Star game.

• Yes, whoever asked, Roy and Chauncey are both wearing number 7.

• Bennie the Bull won’t stop messing with Ludacris on the sideline. He might be the only mascot gangsta enough to not be afraid of Luda.

• 116-99, West, with 9:14 to go. Other than Shaq being Shaqciting, it’s been a rather uneventful game. Still, Shaq and JabbaWockeeeezzzzzzzz was pretty dope. And then the game started.

• Chris Tucker plays the game on the scoreboard during the TO. What is a “saquaro?” On tape, Shaq says it is where he originated, the land of the cactus. CP3 says it’s “something sharp, like a sword.” DWade says a fish. Dwight says it’s a hat. Amare says it’s similar to a dust storm. Chris Tucker chooses cactus, and he’s right. Yao Ming loves this from the huddle.

• Back to live action. LeBron is back and going to take a shot at closing this gap. Three-point play, good. West leads 120-104.

• Writers are bailing out left and right. Bron misses a big dunk, then Dwight misses a three, then Wade gets a follow dunk.

• You can tell Phil Jackson is coaching the West because even the East’s points are way more exciting, the West is just more effective and not as compelling.

• The game is so boring now that I’m googling Melanie Collins. Literally, not figuratively. Found the link of the day, though.

• Anyone else have a feeling this is what a postseason Phil/Mike Brown match-up could be like?

• Dwight rips Kobe then clears it out to go one-on-one…and turns it over.

• Chris Paul catches an oop! Can we turn out the lights yet?

• OK, can Joe Johnson get just 2 points? He wants the ball…and CP3 steals it and misses the dunk.

• Amare/é/’e with the windmill to punctuate the win. Then Brandon Roy with the oop. They should’ve started doing this about 15 minutes ago.

• Bron on the clear-out for the huge flush.

• And that’s it. Final score is West 146, East 119. Kobe led the way with 27, so from a basketball standpoint he probably deserves the MVP. But from an entertainment standpoint, the MVP should totally go to Shaq. My solution? Co-MVPs, Shaq and Kobe.

• And the MVP goes to…Shaq and Kobe! I actually called that in the car three hours ago in the car on the way to the game. What!

• Shaq says he’s just happy to be here. Kobe says it was “fun, it was fun” playing with Shaq again. Will Ernie ask Kobe how Shaq’s ass taste?

So that’s it from Phoenix. Hope you guys had fun tonight and thanks for being with us. We’ll have some wrap-up material in the next few days…