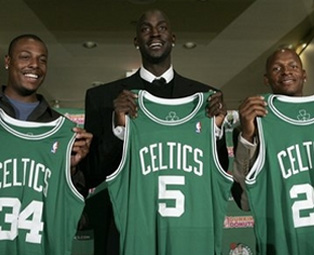 An Eastern Conference team was in trouble. They had their franchise player, a bona-fide All-Star small forward, and they had tried surrounding him various combinations of capable NBA players. But they were never able to fashion a contender. This team could have rebuilt from the ground up, but instead they decided to roll the dice and try to load up with proven vets.

So they went out and got probably the best big man in the NBA, He was a little older, sure, but he had plenty of rebounds and defense left in his legs. To bolster the perimeter, they made a trade with a team on the West Coast, bringing in one of the best pure shooters in the NBA, a guy who had been recognized more so for his off-the-court activities than his on-court skills.

I am talking, of course, about the 1988-89 Atlanta Hawks, who imported Moses Malone and Reggie Theus to play along with Dominique Wilkins. What happened? The Hawks went from second in their division to third and got knocked out in the first round of the Playoffs.

What the Boston Celtics have done this summer isn’t exactly identical to what the Hawks did back then, but it does strike me as very similar. Obviously, Paul Pierce is not as dynamic offensively as Nique was, but he’s a better outside shooter. What they have in common is that they both need the ball to be successful. I know, someone will argue that Pierce is a much better passer than Nique, but last season he averaged just 1 more assist per game than Nique did before the Hawks reloaded. Ray Allen reminds me a lot of Reggie Theus, both handsome ballers with reps in Hollywood. (Though Reggie Theus would probably kill to star in a Spike Lee flick.)

The biggest difference is between Moses Malone and Kevin Garnett. Moses was more of a classic, back-to-the-basket center who banged around down low and padded his rebounding totals by missing layup after layup and grabbing his own rebounds. KG is way more versatile than Moses, and I also think he’ll be more willing to fill a supporting role than Moses ever was.

What I do like about the Celtics loading up this summer is that the Celtics are taking a chance. They had a shot to get one of the best players in the NBA, and they went out and snagged him.

1) The Celts are wishy-washy. They claimed for years they were rebuilding, said they were going to renovate from the ground floor up. They then went about collecting a crew of young players who, with the exception of Al Jefferson, have mostly underperformed. Sebastian Telfair, Kendrick Perkins (last season: 4 ppg, 5 rpg), Gerald Green, Rajon Rondo…all of them are nice, but none of them are true NBA building blocks. Not yet, at least.

2) Just because the Celts changed strategies and got Ray Allen and Kevin Garnett, it doesn’t change the fact that Danny Ainge has been below average at judging talent thus far. And not just with rookies, but with NBA vets he’s brought in and had to ship back out (Ricky Davis or Wally Sexyback, anyone?).

When the Hawks made those moves back in ’88, for basketball fans in Atlanta it was like a lightning strike. All of a sudden, people were excited. I was so pumped that I even went out and bought one season ticket up in the top of the stands, spending my own money that I’d saved from doing yard work. I went to almost every game that year, and while it was fun at first, things started disintegrating and by the time the Playoffs rolled around, I knew it would take a miracle for the Hawks to make the Finals.

They didn’t even come close, and we all learned a lesson from the season: You can have the best players in the NBA on the floor together, but in the NBA it takes a team to win Championships. The Celts are stacked now, but I’m not convinced that having three ultra-talented players is going to be enough to win the East, much less a Championship.
Just ask the Hawks point guard that season, who I’m sure must remember the way things fell apart.