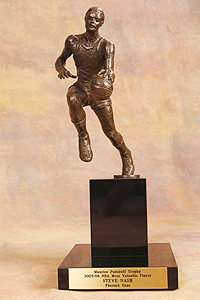 A few weeks ago, I saw a note on the video screen on the elevator here at work that some person had passed away, and that this person was known as one of the world’s greatest thinkers. Ever since reading that, I’ve realized I need to step my thinking game up. Sure, I can produce words on a screen, I can tweet, I can write stories, whatever. But I wondered: Why can’t I be a great thinker? Because thinking is on some other ish. You can think anywhere. You can think everywhere. You can think while doing other things. And best of all, you can say you’re thinking even if you aren’t, and nobody can tell the difference.

So I dedicated myself to becoming one of the world’s great thinkers. And, if I do say so myself, I think it’s worked out pretty well. I’ve been thinking like crazy lately. I mean, I’ve had some incredibly complex thoughts, things you’d never think I’d thought, I think.

And lately, I’ve spent a lot of time thinking about the NBA’s post-season awards bonanza. I was recently told that I will, for the second year in a row, be asked to vote in the NBA’s official post-season awards show, no doubt because of my amazing thinking ability. (How did David Stern know I’m a great thinker? Because he’s David Stern. And you’re not.) And I already got an email this morning from a team PR person lobbying me to vote for one of his guys in a particular category.

I haven’t even gotten around to considering most of the awards, but two of them have me vexed right now: MVP and Rookie of the Year. The two leading candidates in my mind for ROY are Derrick Rose and OJ Mayo, and I’ll get into that debate at a later date.

As far as the MVP’s go, however, well, it’s gonna be a doozy. To me there are three obvious candidates: Kobe, Bron and Wade. I read a post on True Hoop the other day about the race, where a Lakers blogger said he felt LeBron would get the award because it’s “his turn.” Well, I don’t know who’s “turn” it is, and I don’t really care. I just want to vote for the person who deserves it the most.

And right now, I swear to you, I’m not sure who that person is. I think Dwyane Wade has been unbelievable this season, but the Heat, even with him, are only four games over .500. Without him, they’d definitely be way under .500, but how much of a difference does he really make? Then there’s Kobe, who is as amazing as always, but he still plays in what I think is one of the most dangerous systems in the NBA with one of the best coaches of all time who gets Kobe the ball in the best situations possible. And then there’s LeBron, who is surrounded by less talent than Kobe and has the Cavs battling for the best record in the League, but Bron also plays in a much weaker conference. And what about Dwight Howard? Tim Duncan? Joe Johnson? (OK, forget that last one. Sorry.)

Anyway, I thought I’d see what you guys had to say about this MVP vote. I’m looking for advice, for input, for your opinions. I’m your Super Delegate — this is your chance to have a say in how the MVP vote plays out.

I just looked at last year’s ballot and they asked for a top five. So who’s in your five?

Let me know what you think…