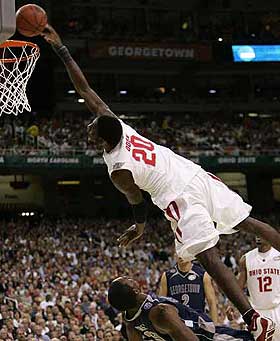 – Is it really here already? All this time and we ended up with Ohio State-Florida? We could’ve picked that after Week 1, couldn’t we? Well, consider this an open thread until I post the World’s Latest game preview in a couple of minutes. Right before the game starts. Man, I love the Internet. Sneak peek: I’ve downed enough DayQuil today to pick Ohio State. That’ll have you clicking refresh. Can I get some predictions before this game starts please?

– PREVIEW: There was a time where I would have stuck with it.

About three years ago, I wrote a column for the Dallas Mavericks website about Yao Ming. Yao was a blossoming rookie who had been taking away All-Star votes from then-center Dirk Nowitzki (damn you, Antoine Walker). So I did what any logical, fair journalist would do at the time.

I slandered the living hell out of him. I said that he would max out as a 15 and 10 player (he didn’t), that he was actually a stiff (he sort of was) and that all of his votes were coming from people who didn’t actually watch Rockets games (they were).

I was then berated mercilessly. In the days that followed, I received countless emails each day that I now swear were written by the writing staff of the Carlos Mencia Show.

I didn’t back down. This is probably the same approach I should be taking with the Florida Gators.

The picks, for me, all year long, were Florida and UCLA. Five whole months of it. Everything came back to the fact that they were National Champions last year and returned almost everyone.

In November, I wrote this: “With how talented this team is, it’s exceedingly harder to drop them out of the Top 3. Even with the loss to Kansas. Even with how flustered Noah looked at the end of that game.”

Florida is unbeatable. Florida has usurped Jesus Christ. Everyone drink the blood of Al Horford for immunity from mental diseases such as March Madness and the lupus.

And I just can’t help but to question it.

This team is not indomitable in any specific way other than the fact that they’ve ran over teams with no size or length. Today, they see an Ohio State team with unmatchable size and length from a single person.

What ESPN and others have failed to realize is that Oden’s mere presence on the floor as a helpside defender does more than any stat could ever flaunt or any on-the-ball defense could ever show off.

Still, they have yet to recognize this. Three commentators even say that the pace without Oden on the floor would favor Ohio State, which is a patently ridiculous attempt to try to win the attention and possible romantic partnership of Billy Packer.

Oh, and to prove their point even further, they have also yet to bring up that Ohio State has won 17 games in a row. Florida? Four.

So tonight I go against the World and myself and pick the team with the best player.

(Who I swear could beat Yao Ming one-on-one.)
UPDATE: – Great early start to this game. I realize it couldn’t get any worse than the pair of Final Four games, even if Florida and Ohio State decided to give up the whole basketball thing and decide this via high stakes cockfight, but this isn’t just a good game by comparison. Two quick threes, a nice Oden left-hand hook, no defense whatsoever. Hope you kept the kids up!

– CBS tells us that all Florida worried about today is food. (Chicken and pasta, if you’re interested [which you’re not.]) No coaching conversations about high screen and rolls over Hunter and Oden, just Billy Donovan yelling “DON’T EAT THE DAMN CASHEWS” at Lee Humphrey in the 4 Seasons lobby.

UPDATE: – Disregarding the fact that Taurean Green can only go right, he is lighting it up early. Almost sexual harassment worthy-active hands on the perimeter for Florida early is really setting the tone.

– WALTER HODGE WHERE HAVE YOU BEEN ALL MY LIFE?

– Hey, everyone, let’s laugh at Joakim Noah’s 17-footer. Or just vomit in disbelief.

– There’s the buzz that the Georgia Dome has been looking for since Lang’s weekend trip. That Oden block was noisy like a rock concert. Then he fought through a baseline seal like a poacher. He’s alive!

UPDATE: – This Florida backcourt (not named Lee Humphrey) has picked a very good time to start knocking down treys. Brewer and Green (who is currently running away with the Player of the Game Award [CBS should break rules violations and just give him a Cadillac{all these parentheticals!}]) hit back-to-back threes to give Florida an 11-point lead early. They look like Dan Majerle from NBA Jam out there.

– Every time Oden makes a loud play, like that disgusting through-the-lane follow throwdown, he lapses defensively on the way back. Take heed, Danny Ainge, Jerry West and that guy who runs the Bucks! That’s what Michael Olowokandi used to do.

Except replace that “make a loud play” part with “eat Cheetos at the end of the bench at Pacific.”

UPDATE: – Halftime viewing: Frasier? Not 45, don’t own a nice car to make up for anything and I hate the movie Sideways. Figure skating? Comfortable in my sexuality. Not that comfortable in my sexuality. Rangers-Angels? Possibility, but I’m still vehemently pissed at Curt Schilling today for blatantly tanking that game. Pro wrestling. DID MR. PERFECT DIE!? OH NO! WHY IS THERE A MONTAGE!? MY CHILDHOOD IS OVER! Law & Order. I don’t need to actually flip to the station to know that I’ve seen it. The Sopranos repeats, oh how I wish this were Sunday and I had HBO. The Bachelor is ruining America, just like Super Sweet 16.

Looks like I’m watching some fake-harrowing story about some Florida/Ohio State player/fan/parent that had an abusive childhood/can’t grow hair like Charlie Villanueva/can only eat canned peaches.

– This could be a real interesting half of basketball if it turns out Greg Oden does have another level, as he was alluding to late in the first half. I’d have a quip here, but this is real, Kobe Scoring 81 serious.

UPDATE: – Chris Richard has been an inexplicable force the last two games and a role player for four years. Lee Humphrey, another guy who won’t be an a pro in this country, just knocked down an NBA three.

– This just in, Isiah Thomas has drafted Chris Richard and Lee Humphrey.

– During the break now, this game seems eerily close. I know “eerie” has been my word this year, but I can see a Conley three and a Harris three making this a 49-46 game out of this timeout. Then again, I thought Dominic James would lead Marquette to the Final Four and marry the sister I don’t have, so take that with a grain of salt. But this will be a one-possession game this half, you can sense it.

UPDATE: – Jamar Butler pulled a Matt Damon in Good Will Hunting and sent Ben Affleck to the Georgia Dome to impersonate him. He’s 0-5 and is the epitome of this Buckeye supporting cast tonight. How much longer do you expect Oden to carry this team on those 37-year-old shoulders?

– Billy Packer is now incredibly defensive in instructing Billy Donovan to dig into the referees.

“Billy should really get on these referees now because my gambling problem led me to bet one of my children on Florida tonight… I mean, because that was a tough call.”

UPDATE: – Al Horford just made the best play of an otherwise ugly shooting night. An alteration and then a transition dunk on the other end. I take him higher than Noah for reasons completely unrelated to hair.

– This game looked well out of hand and then David Lighty came in, the tempo picked up and Ohio State got the tempo back. The Buckeyes have to start driving again and keep the tempo up to allow Oden to be a force defensively and let the guards get them back in this game. Florida’s depth is running Mike Conley into obscurity.

UPDATE: – I’m in the room with three people and Greg Oden just completely defaced Al Horford. This was an actual simultaneous, jinx, pinch-poke-you-owe-me-a-Coke (if we want to be six years old about this) exclamation from all three people: “HOW MANY (capitalized expletive) BLOCKS DOES HE HAVE!?” Yahoo isn’t counting. He does have 22 and 11, though.
– Humphrey lands on the line. That fuzzy feeling in my tummy is finally becoming a fuzzy, green feeling in my eyes from the under-the-table bet I made with a friend.

That’s too lame for even Jim Nantz.

– The only thing Ohio State can do is push the tempo and force turnovers. They got themselves out of this situation against Tennessee. Florida is probably just too deep for the Buckeyes to overcome 75-62 with 2:24 left.

UPDATE: – Funny Daequan Cook took the deciding shot in this game (and I’ll probably write about this tomorrow). Why I didn’t like this Ohio State team at the start of the year was what eventually killed the Buckeyes: youth. If Oden comes back, they win it next year. But he won’t so this team will dwell in mediocrity.

I can’t wait until Ryan Jones yells at me when he reads this in the morning.

– Can you give the Most Outstanding Player Award to the concept of depth? Can you donate the gold of the trophy to the Grand Canyon?
UPDATE: – Stop talking, Joakim. Seriously. Just stop talking. I think you just lost draft stock there. You’re from the mean streets of Greenwich Village, we know, now enjoy your NCAA Championship away from a microphone.
– Corey Brewer is the Most Outstanding Player with the Kamanian line of 13-8. Well, if you had to pick one…

– The Florida Gators are NCAA Champions, 84-75. I’ve decided to end the game notes the only way we know how here at SLAMonline: the same way we review press dinners.

Full recap on Tuesday once I fully digest…