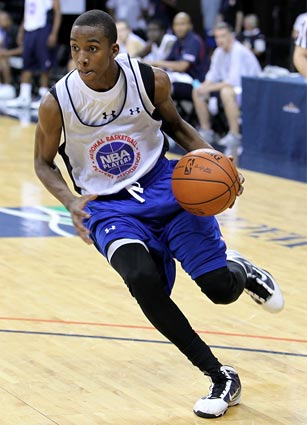 Last week, I was at the University of Virginia in Charlottesville, Va., for the annual National Basketball Players Association Top 100 Camp, for my money, the best event on the circuit. It wasn’t quite as loaded as last summer–a handful of top prospects were at USA Basketball tryouts–but it was still very solid, with a lot of intriguing players from across the nation. Camps like these are more for assessing talent than evaluating intangibles, but it was rewarding to see camp Surprise Player award winner Nick Faust face off with Tourney MVP Dezmine Wells, camp MOP Chane Behanan and Most Outstanding Prospect Anthony Davis in the camp’s chip, in which Faust’s Pistons team outlasted the Hawks, coached by my man Mo Evans of the real-life Atlanta Hawks. Anyway, with no further adieu–along with photos, courtesy of the talented Kelly Kline–here are 20 kids that left big impressions on me at UVA:

—Ryan Arcidiacono, 6-3 rising junior combo guard, Neshaminy (PA): A smooth sharpshooter from Philly’s ‘burbs, “Ryan Arch” displayed the ability to play both on and off the ball, knock down jumpers off the catch and the dribble, get into the lane and finish or create for others and play tough defense.

—Isaiah Austin, 7-0 rising junior post, Grace Prep (TX): The long shot-blocker was a big defensive presence as a shot-blocker down low, was active of both ends of the glass, scored on the interior, ran the floor in transition and had perhaps the camp’s highlight with a monster leaning dunk on the final day of competition.

—Chane Behanan, 6-7 rising senior post, Bowling Green (KY): A beast down low, the bruiser was a warrior and dominated the paint and the boards, but also showed nice athleticism, solid lift and surprising ball skills, often making nice dishes to teammates, hitting short jumpers and making quick moves off the dribble from 15 feet and in.

—Ryan Boatright, 5-10 rising senior point guard, East Aurora (IL): “Boat” is well known for his scoring prowess in the Chicagoland region, but showed the ability to blend his prolific point production with pass-first playmaking, as he ran the show like a true floor general, as well as showcasing his blinding quickness, sharp ballhandling, sensational creativity, high-rising leaping ability and knack for putting the ball in the hole.

—Anthony Davis, 6-10 rising senior post, Perspectives (IL): Another participant from Chicago, Davis is perhaps the fastest-rising player in the nation (he went from an unknown player in a city charter school to a top-10 senior nationally by some scouting services) and the lanky prospect backed up the hype by featuring all aspects of his incredibly versatile game–including big-time shot-blocking ability, excellent perimeter skills for his size, the quickness of a guard (he sprouted from 6-2 to his present height in a matter of months), a deft shooting touch, a great motor and tremendous length and fluidity–to present a ridiculous matchup problem, despite his lanky frame.

—Branden Dawson, 6-6 rising senior combo forward, Lew Wallace (IN): Hailing from the hometown of the late Michael Jackson and considered by some to be the best prospect out of “G.I.” (Gary, Ind.) since Glenn “Big Dog Robinson,” Dawson’s explosiveness and rugged game wore down most of his opponents, as he’s a menace on the boards, finishes with power, defends with passion and doesn’t need touches to be productive.

—Amile Jefferson, 6-8 rising junior combo forward, Friends Central (PA): One of the top prospects in Philly (he attends the alma mater of pros Hakim Warrick and Mustafa Shakur), Jefferson is regarded highly because of his high ceiling, which is downright scary, as his game–great motor, ability to knock down jumpers, excellent length, great rebounding and finishing ability, nice versatility on both ends–in the present.

—Myck Kabongo, 6-1 rising senior point guard, Findlay Prep (NV): The winner of the camp’s leadership award (he woke up other campers for breakfast workouts on the final day, despite suffering from a 101-degree fever), the Canadian native and Texas commit is staking his claim to being arguably the nation’s top floor general, as his defensive intensity, creativity with the ball, playmaking ability and scoring are all at near-elite levels, to go along with his much-improved outside J, nice athleticism and Rondo-like length and quickness.

—Tyler Lewis, 5-10 rising junior point guard, Forsyth County (NC): This diminutive point guard certainly has some physical limitations, but his savvy great ballhandling ability, pass-first (and second) nature, solid outside shooting and ridiculous passing allow him to have an impact every time he hits the floor.

—Hunter Mickelson, 6-10 rising senior post, Westside (AR): An unconventional, fleet-0f-foot big man, the rail-thin Mickelson was more impressive in each outing, as he ran the floor for easy transition buckets, made himself a presence on both ends with his high activity level, knocked down perimeter jumpers, displayed surprising ballhandling ability and made a big impact on the glass.

—Jabari Parker, 6-7 rising sophomore wing, Simeon (IL): The youngest of eight Chicagoans at the camp, the son of ex-pro Sonny Parker continues to carve out a niche as a winner (he played a big role on the camp chip-winning Pistons, just as he did this winter for his Illinois state champ Simeon squad), as his tremendous feel for the game, size for his position, passing ability, finishing skills, mid-range J, ballhandling and overall smooth and versatile skillset are valuable weapons for any team.

—Zach Price, 6-10 rising senior post, St. Edward (OH): An extremely athletic big man, this Lousiville commit is still a work in progress on the offensive end (although he showed signs of developing post moves), but made an impact with his athleticism (his powerful dunks, blocked shots and rebounding were all very noticeable, energetic play and non-stop motor.

—Rodney Purvis, 6-2 rising sophomore wing, Upper Room (NC): An advanced scorer for such a young prospect, Purvis’ burst and mature frame allowed him to get to the rim and finish above the rim (even through contact), but he also showed nice ballhandling and passing ability, solid effort on the defensive end and an accurate enough jumper to make defenders respect him from outside.

—Levi Randolph, 6-6 rising senior combo guard, Bob Jones (AL): A long backcourt prospect and Alabama commit is still a bit of a sleeper nationally, but that should change soon, as his smooth ballhandling, ability to play both guard positions effectively, playmaking skills, great length, defensive intensity, solid athleticism and outside shooting, point guard instincts and creative finishing opened up a lot of eyes at the camp.

—Jarnell Stokes, 6-7 rising junior post, Central (TN): This powerfully-built big man from Memphis used his strength and athleticism to be a monster inside, but besides finishing with thunderous bangs, snatching boards and banging bodies, he showed off surprising agility, ballhandling skills and a nice touch, although he’s still a bit raw offensively.

—Bernard Sullivan, 6-7 rising senior combo forward, Davidson Day (NC): A big-time athlete–he had some of the camp’s best dunks–Sullivan used his versatility to give defenders fits, showing the ability to step out and stretch the defense, bang inside and hit the boards, utilize his athleticism to block shots, take slower bigs off the dribble and run the floor in transition for easy scores.

—Dezmine Wells, 6-4 rising senior wing, Hargrave Military (VA): An Xavier commit and transfer from John Wall’s alma mater (the uniquely-named Word of God Christian Academy), this powerful swingman bullied his way to the basket on command, rebounded like a big man, showed off a much-improved stroke and ballhandling ability, defended with toughness and threw down numerous bangs in the halfcourt and transition.

—B.J. Young, 6-3 rising senior combo guard, McCluer North (MO): A fast-rising scorer from St. Louis, the jet-quick scorer made plays on both ends, seemingly got to the bucket at will, capably set up his teammates, kept defenders honest with his outside J and was a vocal presence on the court.

Again, all photos were shot by Kelly Kline.