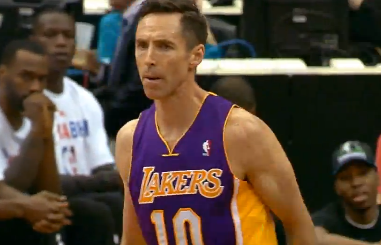 The deadline for the Lakers to use the so-called stretch provision on veteran point guard Steve Nash came and went over the weekend.

Nash will finish out the season and the final year of his deal worth $9.7 million. Per the LA Daily News:

Even with Nash staying in what he has said will likely be his last season of an otherwise accomplished 19-year career, the Lakers are mindful that his health issues may linger. The sensitive nature in Nash’s back injury kept him sidelined for all but 15 game last season. The Lakers are expected to rest him on the second night of back-to-back games. The Lakers also acquired Jeremy Lin in a trade from Houston to add reinforcements around Nash. Because of those health limitations, it is even possible Nash would only play a limited role off the bench.

Yet, the Lakers valued keeping Nash for a number of reasons. His entire $9.7 million salary will expire after this season. Nash would become a mentor for Lin and a positive locker room presence on a rebuilding team. There is also the chance Nash could turn back the clock with vintage performances in a handful of games, perhaps even more.