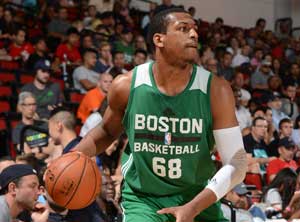 The Los Angeles Lakers have signed undrafted player from University of Texas, Jonathan Holmes, to a multi-year contract. Holmes put up good numbers in the NBA Summer League for the Boston Celtics, and now he’s inked a deal with L.A. More from RealGM:

The Los Angeles Lakers have signed forward Jonathan Holmes to a multi-year contract.

Undrafted after spending four seasons at the University of Texas (2011-15), Holmes averaged 9.2 points and 5.9 rebounds in 23.1 minutes per game over 127 contests with the Longhorns.