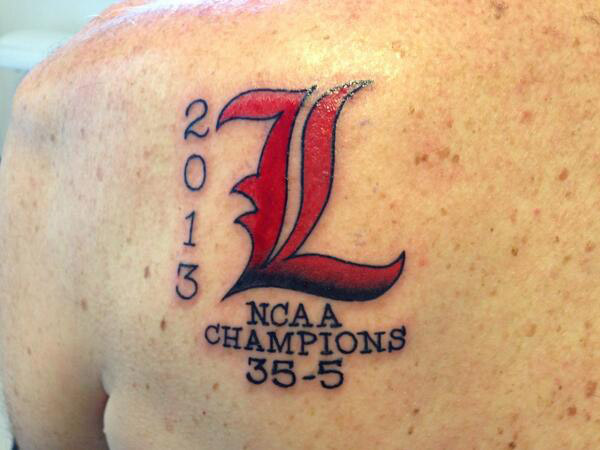 After making a promise to his team earlier this season—that if the squad won the National Championship, he would get a tattoo—Louisville coach Rick Pitino followed through this week, getting some fresh ink on his back to commemorate a memorable campaign. You can peep photos of the tattoo above, and here are more details, via ESPN.com: “On Feb. 9, after a demoralizing loss to Notre Dame that required five overtimes to settle, Pitino told his Cardinals that they’d win out, win the Big East title and get to the Final Four. ‘I then told them they have to stop with all these tattoos,’ Pitino said. That’s when the players fired back at Pitino. If the Cardinals could win the national title, would the coach get his own tattoo? The rest is history. Louisville rallied to defeat Michigan 82-76 in the championship game on April 8, with Pitino becoming the first coach to win national crowns at two schools, and he revealed his tattoo promise in a postgame interview. ‘Our biggest motivation,’ senior guard Peyton Siva said after the victory, ‘was to get coach a tattoo.’ As for Pitino, he said he wasn’t fearing the pain. ‘It wasn’t even close to the pain I had with kidney stones,’ Pitino said. ‘That was like an ‘A’ in pain, this was a ‘C.'”