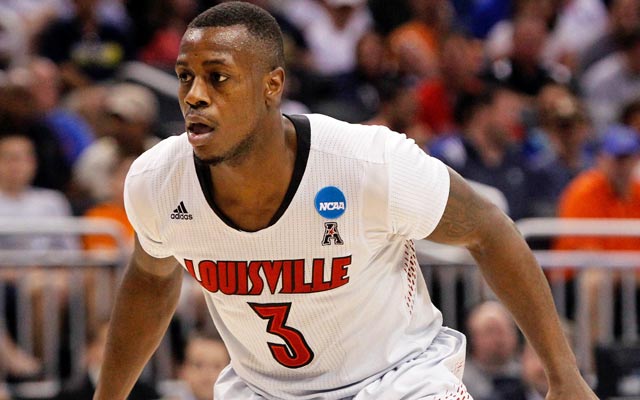 Chris Jones’ time at Louisville came to an end over the weekend. After returning from a suspension and playing in one game, Cardinals coach Rick Pitino announced that Jones had been dismissed from the program. In his final game with the squad, Jones—who was third on the team in scoring and first in assists and steals—played 36 minutes and scored 17 points in Louisville’s 55-53 win over the Miami Hurricanes. There’s no word what led to the decision to dismiss Jones, but a source told The Courier-Journal that he “messed up” and will seek help for “issues stemming from an ongoing battle with ADHD.”

A day after his first game back from a suspension, Chris Jones has been dismissed from the University of Louisville basketball team.

The school made the announcement on Sunday afternoon and said there would be no further comment on the matter. Jones did not return multiple messages seeking comment, though a source close to the point guard said Jones was “devastated” by the decision.

Spokespeople for both U of L police and the Louisville Metro Police said Sunday that there had been no reported incidents involving Jones in recent weeks.

“He’s finished,” coach Rick Pitino said when reached by The Courier-Journal on Sunday afternoon. “There won’t be any comment.”

U of L takes on Georgia Tech at 7 p.m. Monday night in Atlanta, and freshman Quentin Snider is expected to start in Jones’s place.

The news comes five days after U of L announced an indefinite suspension of Jones just before the Cardinals’ trip to Syracuse. He missed that game, which Syracuse won, but Pitino indicated that he wasn’t sure if Jones would return after the one-game suspension or remain suspended.

“We missed him a lot but, you know, it’s his selfishness that hurt the team,” Pitino said Wednesday. “It’s all cleared up – he could play the next game if he does what the assistant coaches tell him to do. If he doesn’t, he sits again. And I don’t care if he sits the whole season, to tell you the truth. I (couldn’t) care less. Because if he doesn’t do the right things and act like a Louisville man, he can move on and try to go to Belgium somewhere.”