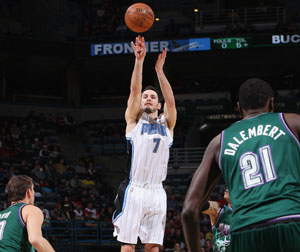 As first reported in the Trade Deadline Open Thread, the Magic traded JJ Redick, Gustavo Ayon and Ish Smith to the Bucks for Beno Udrih, Tobias Harris and Doron Lamb. Redick will be playing behind Monta Ellis and Brandon Jennings, effectively leaving him as a third wheel in an offensively strong backcourt.