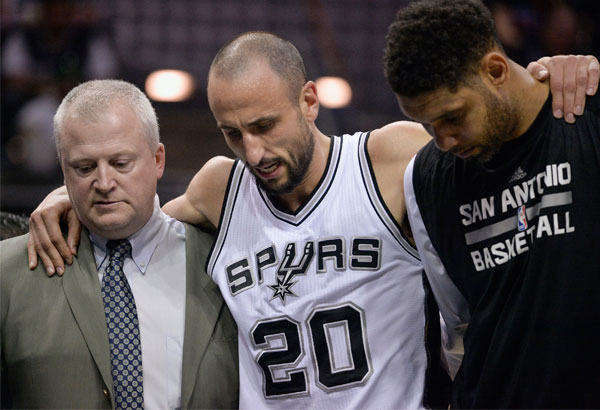 per Popovich, Ginobili will be out 'a good week to 10 days'

Ginobili was hurt late in third quarter, and left the gym hobbling on crutches.

The Spurs don’t seem too concerned, however.

Ginobili left the locker room after the game in crutches. But that appears to have been better than what the Spurs initially feared when Ginobili first went down, and was unable to put any weight on his right foot as Tim Duncan and trainer Will Sevening helped him off the court.

“Fortunately, I don’t think it’s as bad as they thought,” Duncan said. “Hopefully he can be back pretty quickly…because we need what he brings to the team.”

Ginobili had been weakened by a stomach virus for most of last week, but appeared to be close to full strength with 11 points and two assists before being hurt. He also had one of the game’s biggest highlights with his chase-down block of Minnesota’s Kevin Martin. […] This has been one of Ginobili’s most durable seasons in years, with just eight absences over the Spurs’ first 65 games.