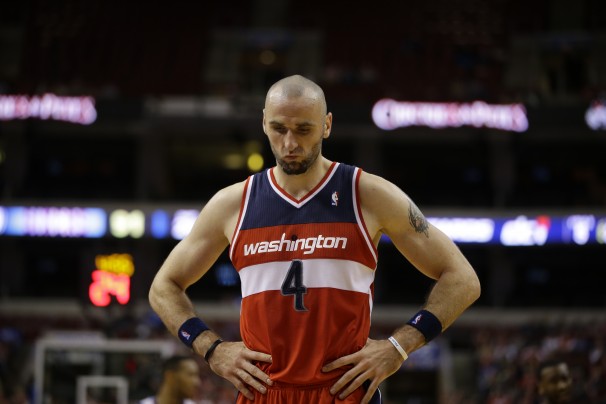 Free agent center Marcin Gortat averaged 13.2 points, 9.5 rebounds, 1.7 assists and 1.5 blocks per game while shooting 54.2 percent from the field in his lone season in Washington.

Those numbers were good enough to earn the big fella a new five-year, $60 million contract to remain with the Wizards.

Marcin Gortat returned from his native Poland and landed in his offseason home of Orlando on Tuesday evening having failed to reach an agreement on a new deal with the Washington Wizards. A few hours later, Gortat – tired and fatigued from a day spent talking and traveling – agreed to a five-year deal worth $60 million to remain in Washington, according to people with knowledge of the situation.

After advancing to the second round for the first time in nine years, the Wizards have made it a priority to keep their core intact, with a special emphasis on Gortat, a 6-foot-11 center. Washington contacted Gortat immediately after the free agent negotiating period began at 12:01 a.m. Eastern time and were engaged in contract talks a few hours later.

The swift agreement with the 30-year-old Gortat allows the Wizards to shift their focus to also bringing back starting small forward Trevor Ariza, who had a resurgent season and established himself as the team’s best three-point shooter and perimeter defender.

The Wizards were confident that they would be able to keep Gortat and expected that he will come with a price tag in the $11 million to $13 million range, based on the market for skilled big men. The two sides were initially unable to agree upon the number of years, according to a league source with knowledge of the situation. When Wizards President Ernie Grunfeld added the fifth year, Gortat agreed to return. The deal has no player or team options and is fully guaranteed.

I'm proud to say Washington will be my home.