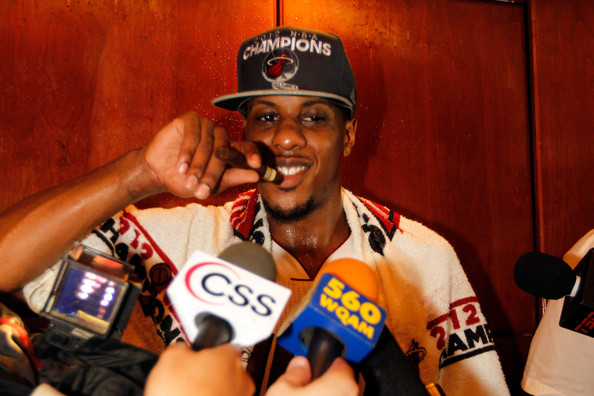 Miami Heat point guard Mario Chalmers earned the respect and swayed the opinions of many fans during last year’s Playoffs, playing an instrumental role throughout the Miami Heat’s Championship run. In Game 4 of the NBA Finals, the Kansas product had a breakthrough 25-point performance, with 12 of those points coming in the fourth quarter. He followed that up with a solid 10 point, 7 assists, 2 rebound line in the series-clinching Game 5. And according to Chalmers, who will be entering only his fifth NBA season, he’s barely approached the surface in terms of his talent level and production potential. While he still has a lot of room to grow, Chalmers believes right now he’s already a top-10 NBA point guard.

Mario Chalmers: “[Rondo’s] not the best, but he’s in the top five. There are a lot of great point guards in the league, Deron Williams, Chris Paul and Steve Nash. There are a lot of great guards in the NBA so for him to say he’s the best is a pretty bold statement. I’d say that I am in the front end of the top 10. [By the end of my career] if I’m not the best, than at least one of the best.”