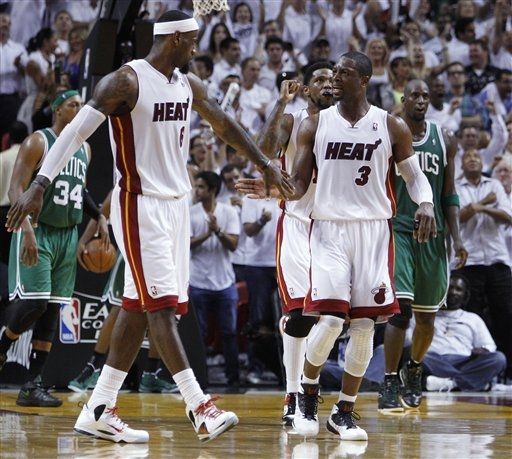 This Tuesday night. Miami Heat. Oklahoma City Thunder. You won’t want to miss this. But beforehand, do remember how the Heat got there—with an incredibly impressive victory over the feisty Boston Celtics. Here’s Yahoo! Sports on the Game 7 recap: “LeBron James finally got a Game 7 victory, on his third try. Next up, the NBA finals – and his third try at that elusive first championship. A year after watching someone else celebrate on their home floor, the Miami Heat were the ones dancing at midcourt. James had 31 points and 12 rebounds, Chris Bosh hit a career-best three 3-pointers – the last sparking the run that put it away – and the Heat won their second straight Eastern Conference title by beating the Boston Celtics 101-88 in Game 7 on Saturday night. Miami opens the title series in Oklahoma City on Tuesday night. The Heat got there by outscoring Boston 28-15 in the fourth quarter, with the ‘Big Three’ of Dwyane Wade, Bosh and James scoring every Miami point. ‘We decided to come together and play together for a reason,’ Wade said. Wade scored 23 points, Bosh finished with 19 and Shane Battier added 12 for the Heat, who won a Game 7 for the first time since 2004 – Wade’s rookie season. Now it’s back to the finals, where Miami fell in six games to Dallas a year ago.”