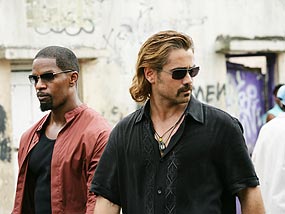 To say this movie was a bust would be giving it a compliment. This movie was so boring that I would much have rather watched Oliver Stone’s classic epic Alexander starring Colin Farrell, na’mean? I would rather watch a 24 hour marathon of the original Miami Vice television series while I’m buck-naked on a chair made of ice than watch Jamie Foxx constantly ice grill everyone and they mama in this movie one more time. I’m not playing. Jamie was ice grilling so much that his lips looked like duck lips, puckered up all the time. And really, what’s really really good with Colin’s wig piece? Only The Donald has a more interesting ‘do than Colin did in Miami Vice. I’ma start calling him The Colin.

In other words, the movie was about as good as a kaka popsicle.

The movie is basically about two Miami detectives, Ricardo (Jamie Duck — I mean, Foxx) and Sonny Crockett (Colin Farrell), who stumble onto a drug case that the FBI has been trying to crack for the longest. Little do they know, there’s a leak in the operation, and the feds get some of their undercover cops blown completely apart in they D-car. (That scene in the movie was bananas. There were more limbs flying in that car than in Paris Hilton’s hotel room.) They recruit The Colin and Jamie the Duck to help them get deeper into the drug operation than they could with their own men. Problem now is that they have to convince the drug lords that they’re bad like LL was back in the day.

After convincing a few drug lords that even with an undercover cop’s wig piece he’s still a criminal, Colin Farrell ends up falling for the amazing Asian who keeps men’s hearts racing, Isabella (Li Gong), who just so happens to be the head drug honcho’s right hand woman and lover. She wasn’t all that, but Colin thought so. And so did her boss’s right hand man, who grew jealous of her love affiar with The Colin. You knew that was going to become a problem. It was funny because at the end of the day their love affair was more passionate than the one The Colin had with Rosario Dawson in Alexander, so I guess she was doing something right. She had him singing, “Thoia-thoia-thoia-thoing-thong!” Needless to say, their affair was going to compromise more than a few things.

As for JD, he was on his grind and rarely heard from. This movie was all about the white man who allegedly gave Britney the business in a bathroom a few years back, na’mean? Maybe they would’ve gave Jamie more screen time had he rocked the same curls that my man Philip Michael Thomas was pimping back in the ‘80s. Now that was a gangsta. He was really a Rico. Don’t believe what that girl said, son. You could sing! “She’s a Liar!” LOL. You crazy! Son was hot garbage back in the day. Only J.Lo and K-Fed make that man look like Al Green behind the mic.

When the flick was over and Rico and The Colin were cruising Miami, I was like, “This movie is no more than 2 Gangstas.”

Aside from the only two action sequences (one in the beginning and one at the end), this movie was nothing more than a half-assed love story. At times I found myself laughing at JD and The Colin for truly trying to be Don Johnson and Philip Thomas. They was trying to be pretty but deadly, you know what I’m saying? Take those facial expressions to the Villiage, homie! I mean, it’s a real shame when the movie becomes entertaining only because a speaker blew out in the theater and we couldn’t hear none of the dialogue. I hadn’t seen white people that upset since Michael Jackson married the King’s (Not Biggie) daughter.

Another thing is that it really didn’t even take place in Miami. And no one had a vice. The movie was about a drug cartel, but I ain’t seen one fiend. What kinda ish is that? I’ve seen more drug fiends on 7th Heaven than in this movie. That’s word to everything.

The best part of the movie came before it even started. Me and my cousin was talking about that other bum ass movie, Collateral Damage. My cousin said, “That movie was whack! I mean, who’s ever heard of a Mexican terrorist?” I just couldn’t stop laughing. What’s really hood, Hollywood? Y’all movie directors and writers and producers are straight slipping. Y’all lucky no movie studio or company done hired me. My motion picture ideas would put a lot of y’all outta business. That’s word to everything.

You know what? My bad. I don’t mean to ramble. I’ma sum this movie up for y’all real nice and simple like. The script: wack. The acting: a joke. The dialogue: huh? The chemistry between JD and The Colin: oil and water. The movie: Corny like the feet of a tribesman who walks on hot coal.