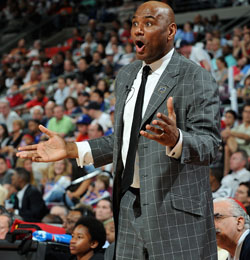 Was it really this easy for the Pistons to get this confused about its identity — to question whether it should rebuild or reload? They’ve finger-pointed for nearly an entire season. They pointed at Allen Iverson and then Chauncey Billups with his tremendous success in Denver. They pointed a finger at the architect of the ’04 championship squad, Joe Dumars. They blamed Rip and his ego, which cast a shadow longer than the Piston bench at times.

Of course, they always blamed Darko. He ruined things from the beginning.

But, mostly, they pointed toward Michael Curry. At every game, during the sweep in the first round, Curry played the scapegoat role. Today, Curry is gone and we can only imagine what happens next:

“This was a difficult decision to make,” Pistons president Joe Dumars said. “I want to thank Michael for his hard work and dedication to the organization. However, at this time, I have decided to make a change.”

(Note: Not that we’re laughing, but it’s funny how news like this comes after reports like these. The AP wasn’t what it used to be folks!)

A man who captained the Pistons from 59 wins to 39 in just 12 months will receive no extended eulogy. Rather, the talk almost immediately will turn to finding a savior. But with the uncertainly surrounding the team, who will the Pistons dubb as head coach? A quick read through the beat writers’ reports mention three names, none exciting or surprising: Bill Laimbeer, Doug Collins, Avery Johnson.

We’ve said this many times before: A coach is only as good as his players. And, clearly, much more needs to be done than replace the Detroit head man. That said, who do you think has the best chance of pulling the Pistons out of this spiral of negativity?