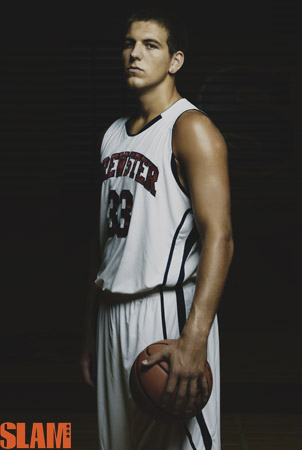 After trimming down his list to Duke, Florida and Michigan, Mitch McGary, the top power forward in the nation,  shocked the basketball world when he opted for the underdogs this afternoon and announced his intentions of joining the Wolverines in Ann Arbor next fall instead of the ACC or SEC. The  6-11 Chesterton (IN) native, who was featured in SLAM 152, ranks second in SLAM’s Fresh 50-2012. From ESPN: “A week and a half ago, just after Mitch McGary listened intently to the final pitches from the head coaches of his top three schools — Duke, Michigan and Florida — he took out a piece of paper and began jotting down the pros and cons of each. Those lists came out even. It wasn’t until McGary, who is ranked No. 2 in the ESPNU 100, began to think about the intangibles that he zeroed in on a clear winner: Michigan. “Looks like I’m going to be a Wolverine,” said McGary, a 6-foot-10 senior forward at Brewster Academy (Wolfeboro, N.H.) and native of Chesterton, Ind. “It was a hard decision, obviously, but when I started to focus on just what I was feeling, I kept going back to the fact that I felt like I could trust the Michigan coaches more than any other staff. “No disrespect to Duke and Florida, but the whole Michigan staff came across like my brothers but coaches at the same time. I could tell them anything. That was key for me.”McGary announced his decision live on ESPNU on Thursday afternoon. Ironically, the thing that attracts most recruits to Duke and Florida proved to be a detractor for McGary. “Both Duke and Florida have had established programs for years and have won titles recently,” McGary said. “I didn’t like that as much as I liked the idea of coming in and helping to turn Michigan’s program around. That’s more of a challenge for me. With lots of hard work I hope to make a huge footprint in the program. For right now, I’m just happy with my decision.”