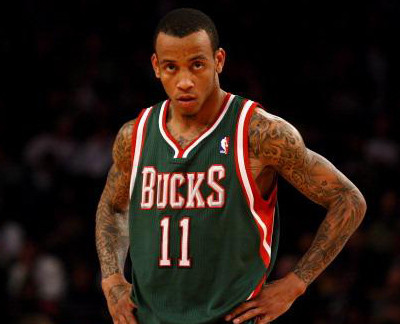 Free agent guard Monta Ellis has reportedly whittled his list of potential suitors down to four: Atlanta Hawks, Sacramento Kings (who may be the front-runners at this point), Dallas Mavericks and Charlotte Bobcats. Word is that Ellis hopes to make a decision within the next 36-48 hours. Per NBA.com: “Milwaukee Bucks free agent guard Monta Ellis is currently deciding between offers from the Sacramento Kings, Atlanta Hawks and Dallas Mavericks, according to a league source. Ellis is intrigued by the Kings, according to the source. Sacramento will have to move one of its existing guards first, however, to be able to get Ellis, a career 19-point per game scorer and one of the last major free agents left on the market that hasn’t yet agreed to terms with a new or current team. Sacramento agreed to acquire Bucks forward Luc Mbah a Moute Tuesday for two future second-round picks, according to league sources. It’s not clear if getting Mbah a Moute, who is scheduled to make $4.58 million next season, would prohibit the Kings from being able to make a run at Ellis. The Mavericks would almost certainly have to find a trade partner for forward Shawn Marion and his expiring $9.3 million contract to be able to create enough cap room to sign Ellis. Dallas agreed last week on a four-year, $29 million deal for free agent point guard Jose Calderon, and also have deals for veteran Devin Harris and Israeli point guard Gal Mekel. But the Mavericks need a two guard. […] The 27-year-old Ellis averaged 19.2 points per game last season for the Bucks, who were the eighth seed in the Eastern Conference and were swept by the Miami Heat in the first round of the playoffs. After agreeing to sign guard O.J. Mayo when the NBA moratorium on contract signings ends Wednesday, the Bucks are also likely to lose their other starting guard from last season, restricted free agent Brandon Jennings.”